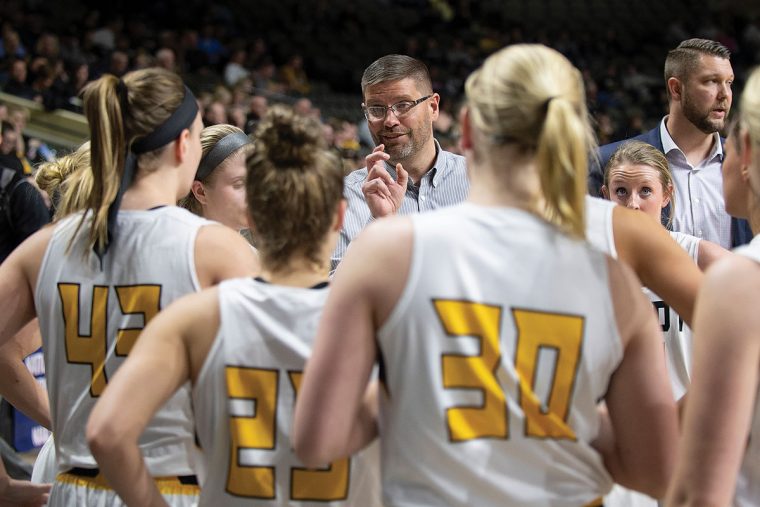 After his first year of coaching women’s basketball at Dordt, Bill Harmsen was voted top coach by 12 other coaches in the GPAC league.

“It’s humbling,” Harmsen says, “but it’s a direct reflection of our players and how hard our women worked this year to earn respect in our conference and nationally. We have really great women here in our basketball program.”

Harmsen, a Sioux County native and former coach at Western Christian High School in Hull, Iowa, earned the honor after his first season coaching for Dordt. For Harmsen, coaching is a way to have an impact on people, and his players testify to his positive influence.

“Coach Harmsen is well-deserving of the Great Plains Athletic Conference (GPAC) Coach of the Year award,” says Erika Feenstra, a sophomore forward on Dordt’s women’s basketball team. “He spends countless hours not only investing in the game of basketball but also investing in each of his players.”

Feenstra led the team in scoring and rebounds; she set a Dordt record for most points in a single season while earning NAIA National Player of the Week honors for her 43 points on November 28 against Northwestern. Her accolades are only some of the records set by the team this year. Harmsen guided the Defenders to a 20-19 regular season mark and a 13-9 league record. The 20-win season is the first in the program’s history and is the best since the Defenders were 19-13 in 2009-10.

“Those achievements were noticed by GPAC coaches who have great respect for him and the program,” Corey Westra (‘97), GPAC commissioner, says.

Each year, the coaches in the GPAC collectively vote for coach of the year in their respective sports.

“For each coach it is different,” Westra says. “Some look at placing in the conference, and others look at how a team performed in a given year.” Westra believes the award shows the respect Harmsen earned for how he led the program in his first year.

The Defenders finished fourth in the league—the best finish for Dordt’s women’s basketball program since the league was formed in 2000-01.

“The team performed well on the court this season, but seeing them grow in all facets of their lives is especially encouraging,” Dordt Athletic Director Ross Douma says.

Harmsen passionately supports “The Defender Way,” a statement in which Dordt’s athletic department commits itself to equipping student-athletes for servant leadership, academic excellence, and winning seasons.

“I really admire the passion, intensity, and enthusiasm he brings every day to practice and games,” Feenstra says. “Coach Harmsen’s encouragement goes beyond basketball—he encourages us to excel in the classroom and as Christian stewards.”