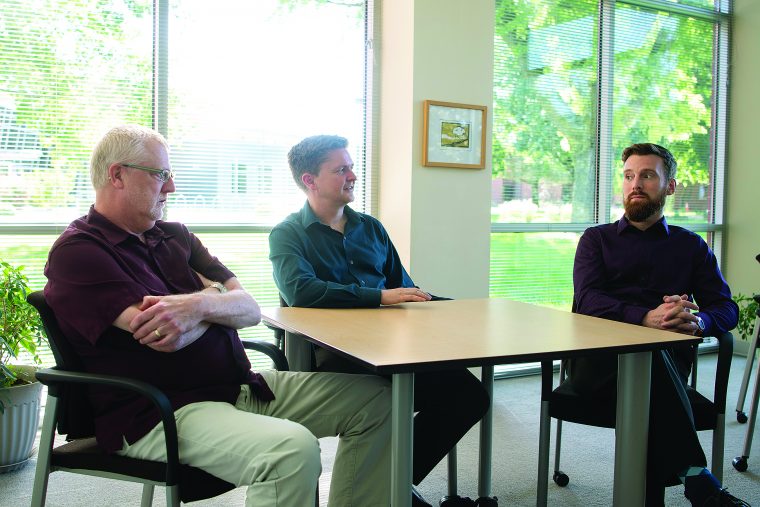 Taking on a new name is more involved than most people may at first realize.

When Dordt College became Dordt University in May, changing the language in Dordt’s alma mater was likely not one of the first things to come to mind for most people. But Music Professors Ryan Smit and Dr. John MacInnis and English Professor Dr. Bob De Smith took on the task. The updated version stays true to the original version written by Dale Grotenhuis and Merle Meeter, and, in the end, contains only two differences: the switch from “college” to “university” and a phrase change in the second line to rhyme with the name change.

“Taken together, I believe these changes bring even more focus on Christ as the author and head of our beloved university,” says Ryan Smit, instructor of music.

The challenge for the professors was to determine how much of the alma mater needed to be rewritten: whether to simply change “college” to “university” or to write a whole new set of lyrics and music. They decided it was important to preserve most of the original song and began writing a series of drafts. Once they had arrived at a version they felt confident in, they decided it would be beneficial to hear the new version sung–and who better to sing it than the Dordt Concert Choir?

“The added benefit of this process was receiving feedback from the 55 students of the Concert Choir, who have a strong interest in the project because of how often they sing the alma mater each year on tour,” says Smit.

The students gave their opinions and even offered some additional changes, such as replacing a semicolon with a comma and removing a verb from the second phrase of the song to preserve the original rhythm.

Holly Hiemstra (‘19), a choir member and nursing major, says she was hesitant about the changes at first but was pleased with the final result. “I was worried that they were going to completely rewrite the song, and I felt it would have been a bit sad to let that piece of Dordt’s history go,” she says. She has especially treasured the tradition of having alumni join the choir in singing the historic song from memory at concerts.

MacInnis is also pleased that the new version effectively retains Dordt’s history. “I’m glad that small changes were enough to preserve the substance of the text and tune while allowing the song to reflect this new day in the university’s development and expansion. To God be the Glory!”