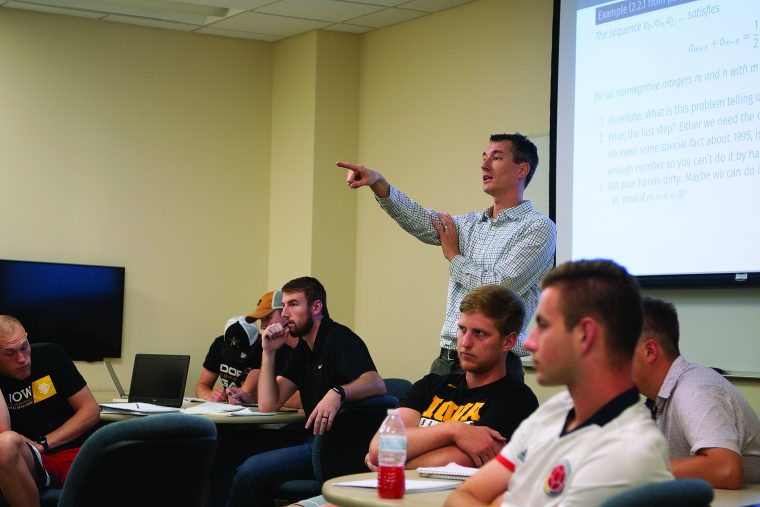 “There will be times this semester when you will get stuck, and that is okay. What is not okay, however, is giving up.”

Read through the fall syllabus of Dr. Tom Clark’s Math 291 course, and you might be inspired to take the problem-solving seminar. Problem-solving, explains Clark, is at the heart of doing mathematics. No matter the type of problem, Clark wants his students to sharpen their mathematical problem-solving skills, develop perseverance when it comes to problem-solving, and practice creativity.

“You have to be okay with that feeling of being stuck. What do you do when you get stuck? You either quit or persist. I hope students get to experience both the getting stuck and the persisting because that feels good—and to believe that they are capable of solving hard problems,” says Clark.
Every Monday at 3:15 p.m., 18 students cluster in groups around work tables. Clark introduces the class to a topic and spends about 15 minutes collaborating with the students on a problem. Then, the class breaks into groups so they can get to the business of doing mathematics. Clark moves between groups, giving hints and pushing students to think.

“Mathematics is not a spectator sport. In this class we really want students to experience doing mathematics,” says Clark. “They can read problems, try, fail, solve some, ask questions. It’s their turn to be in the driver’s seat.”

To Michael Vander Wal, a computer science major, one of the key concepts Clark has taught in Math 291 is that problems cannot be solved if you don’t give them a chance.

“There have been several times when I have looked at a problem and immediately thought, ‘Oh, this is way too complicated for me—I’ll just skip it and go to the next one,’” says Vander Wal. “But in most cases, when I actually try to solve the problem, I can either simplify it or find enough patterns to where I understand what is going on and can eventually solve it. When a problem is too complex, you try to at least do what you know you can, and then go from there.”

Group work is an important element of Math 291, says Clark, because a group can generate more ideas and provide more diversity of background information.

“A good group can really work together to leverage a variety of strengths and solve things together,” he says. “Maybe one person sees a geometric angle to a problem, then someone else does the calculus, and someone else figures out what the problem is really asking.”

Zach Bussard, an engineering major, has appreciated the group work.
“In the working world, more often than not you have to work with other people to solve a problem,” says Bussard. “Professor Clark has been great in allowing us the freedom to experiment with our own ideas while also providing the right amount of assistance to get us back on track when we need it.”

“Professor Clark is the perfect choice for this course,” says Lucas Den Herder, a secondary education major. “He brings high energy and is genuinely excited to learn with us, often discovering the answers to problems at the same time we do.”

“I love teaching, and I love helping students learn about the subject that I enjoy so much,” says Clark. “It’s fun to see students learn and to get to talk to them one by one, but it’s even better to watch them really get excited about solving a problem because it’s connected to something they’re interested in.”