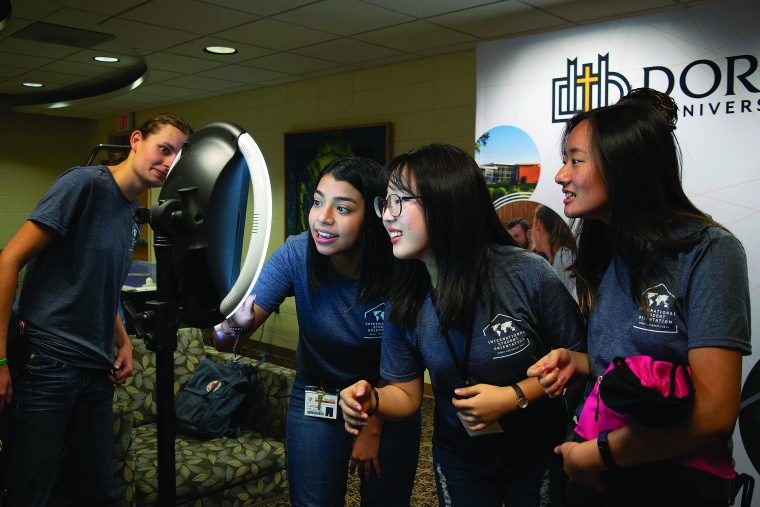 Dordt is expanding its global footprint to bring to campus students, short-term and long-term scholars, and researchers looking to experience American culture in a specific context.

“This is something Dordt has had interest in for some time,” says Adam Adams, Dordt’s director of global education. “The program gives us access to parts of the world that our students have maybe never heard of; it helps break down stereotypical thoughts and ideas that we may have about other parts of the world. And all our students can learn from one another, because of the different cultural perspectives they bring on the kingdom of God.”

Most students who come to the United States use an F1 visa—a degree-seeking visa. These students must spend a year in the classroom before they can do any experiential learning outside the classroom. With a J1 visa, the student is an exchange visitor and can stay for varying lengths of time, giving them more opportunities for participating in off-campus activities such as visiting local schools for teaching opportunities or experiencing life on a farm. It’s a way to see how American culture addresses things differently than their own culture might.

The process to bring this program to Dordt began several years ago, requiring Dordt to show its current global involvement—to highlight how Dordt has had international students and partnerships for an extended period of time. Fittingly, it was approved on May 21, 2019: about a week after Dordt College became Dordt University.

In addition to improving their English fluency and being able to tell prospective employers that they studied in the United States, exchange students get involved in Dordt’s community, says Adams. “Dordt offers exchange students a particularly unique opportunity, compared to large institutions in more urban areas, because our students make friends at churches and spend time in families’ homes, experiencing rural community values.”

“I’ve met many friends from diverse countries,” says Sunbim Kim, an exchange student from South Korea studying at Dordt this fall. “I’ve learned about other cultures and perspectives. I really enjoyed WOW week; I will bring the games I learned there back to my country. I’m so happy to be at Dordt, and I have gratitude for God for giving me this wonderful opportunity.”

“This is a demonstration of Dordt’s global footprint,” says Adams. “We know that every tribe, tongue, and nation is part of the kingdom of God. So, we want to represent the diversity of the global church on our institutional campus. And now we are recognized by the U.S. government as an institution that is competent and prepared to host international guests.”
Expanding Dordt’s global footprint with the J1 visa is timely, given that Dordt became known as Dordt University this year.