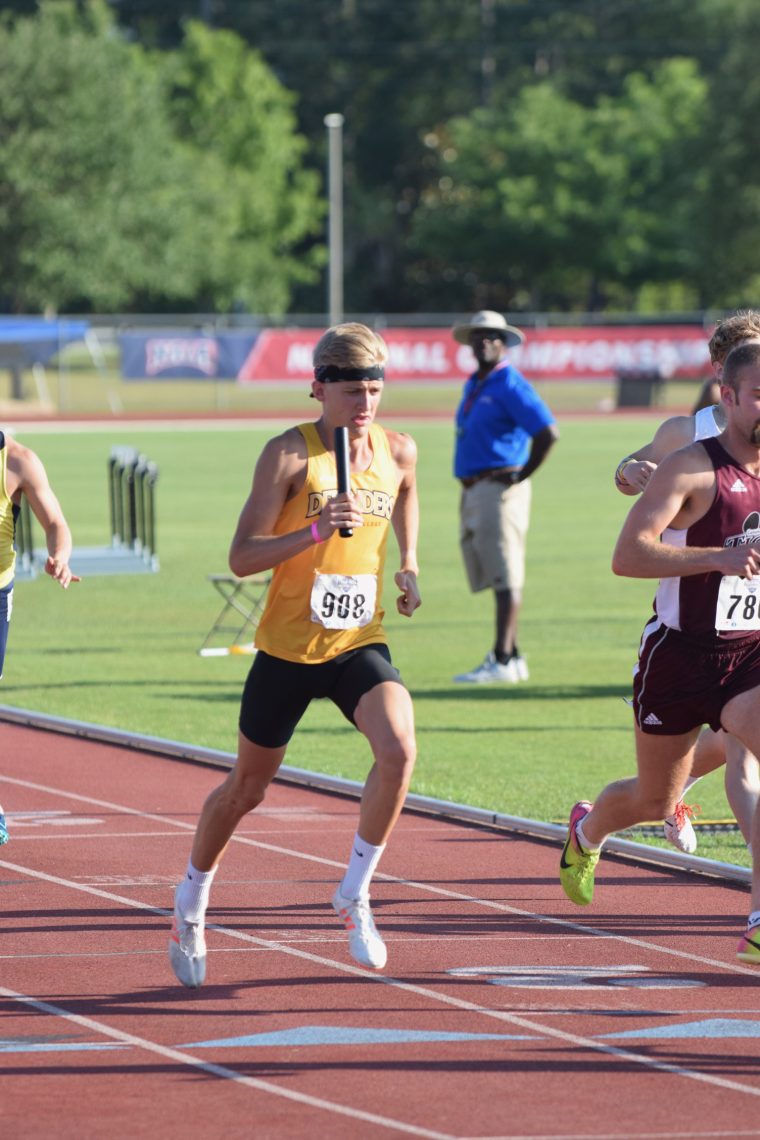 On June 24—exactly one month after he and his 4×800 meter relay team claimed a national title at the NAIA National Track and Field Championships—junior David Temte passed away in a car accident in Montana. He and his twin brother, Benjamin, who also died in the crash, were returning to their hometown of Bloomington, Minnesota, from a two-week road trip out west. They were 20 years old.

On September 11, the Dordt community gathered in the B.J. Haan Auditorium for a special chapel service celebrating David’s life.
During the service, Nate Wolf, Dordt’s cross-country coach, spoke. Wolf recalled how, when David first transferred to Dordt and committed to running cross-country, he recognized David as more than just a running revelation. Over the 16 months David ran for Dordt’s cross-country team, David claimed many titles: All-American, a national champion, a conference champion, and a school record holder. But what mattered most to David were the connections he made with those he loved.

“What I remember is David staying late after practice to talk with people as he stretched, or how he encouraged his teammates,” said Wolf in his speech. “I remember how he quietly slid over to include someone in conversation that other people had overlooked. It was his smile, his sense of humor, and how he showed his love for me and so many of you. It was the way he communicated that love for us.”

On May 24, David along with fellow Dordt athletes Anthony Ghiorso, Matthew Van Eps, and Jebadiah Merkle were part of the first 4×800 relay team in Dordt’s history to earn the national title at the championships in Gulf Shores, Alabama. The next day, Wolf and the cross-country team stood at the top of the bleachers on the back stretch and watched as Van Eps sprinted down the home stretch to win the first-ever men’s individual track and field national title in the 800-meter race.

“David and Anthony sprinted down the bleachers when Matthew made his way down the home stretch,” said Wolf. “They were wearing sandals, which went flying as they raced each other to see who could get to Matthew first. I remember the joy David had for that race—something he wasn’t even directly part of—and the way he was able to celebrate the success that day.”
David, said Wolf, was always willing to take time out of his day to care for others with a quick hug or an honest text. During the days leading up to his death, David had sent Snapchats and text messages to his friends telling them how much he loved them and, as Wolf said, “giving them one last message from his heart—being vulnerable one more time, being who he was one more time.”

During the memorial, Wolf called for the Dordt community to take time to care for each other.

“What I take from the 18 months that I knew David: Love more, care more, have more friends, be more vulnerable, be honest, tell people how you feel about them. If the depths of our pain over the loss of someone is only exceeded for the love we have for that person, then David was immensely loved.”

Wolf said David understood what the author meant when, in Hebrews 12:1-3, he wrote about running the race with perseverance—David lived his life striving to persevere in his faith daily.

“See your life in this world for what God says it is—it’s a race, and the prize the apostle Paul writes of is attained when we are united with Christ Jesus,” says Wolf. “David and Benjamin have run their race, and they have received their prize. I’m sorry it doesn’t lessen the depth of our grief or explain why this happened. But I am thankful we have the hope of the resurrection of the risen Christ. Our hope of seeing David and those we love that also claim Christ as savior is greater than any apology that I have for you. Claim it. Look forward to it. Let it change the way you live and the way you love and the way you express your love.”