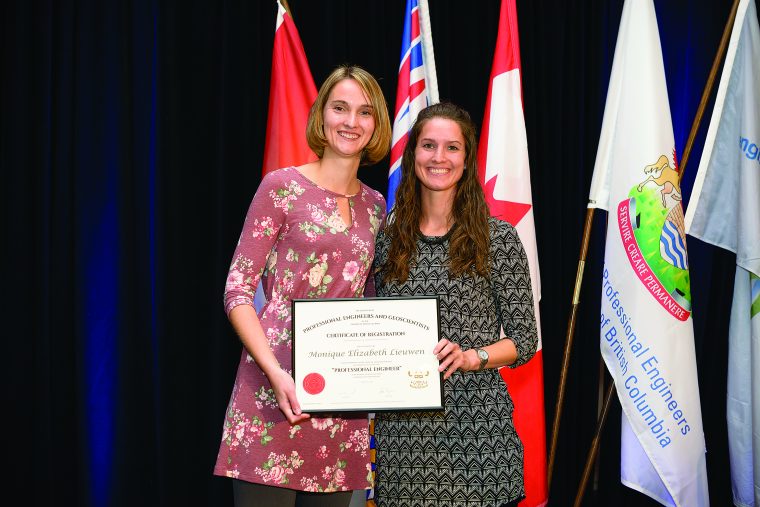 “I really wanted to go to a Christian university, and I wanted to go away from home and have my own adventure,” says Lieuwen, whose mother and several cousins attended Dordt. “I’ve just always known about Dordt—it was the only place I considered and the only place I applied to. I think I always knew I was supposed to go there.”

Lieuwen’s favorite part of college was being part of the community—having all her friends in the same building and developing deep relationships over their four years together. She and her roommates loved sharing life together. And Lieuwen found that small class sizes allowed professors to really know and care for their students. She also loved participating in intramurals; at one point, she remembers playing on three intramural floor hockey teams simultaneously. “That’s what Canadians are good for I guess,” she adds with a laugh. She also played intramural volleyball, sand volleyball, and ultimate frisbee.

“I’m a really practical person, so I wanted to study something useful, something in which I could get a degree in four years and get a good job that I enjoyed.” Gifted in math and science, she found herself drawn to engineering. “I especially loved that, at Dordt, I learned not just to do engineering but to do it from a Christian perspective.”

As a student, Lieuwen participated in AMOR and PLIA: short-term mission opportunities for students. With AMOR, she went to Nicaragua, working on construction projects that included laying concrete for a new school. With PLIA, she served on the coordinating committee for two years, helping with logistics and chairing the committee one year. These projects taught Lieuwen what it meant to sacrifice and serve those around her. Though she didn’t realize it at the time, they planted in her a desire to do humanitarian works of service later in her life.

After college, Lieuwen knew she wanted to move back to Canada, so she applied for jobs throughout Alberta and British Columbia. The first offer she received was in the environmental engineering department at the city of Abbotsford in British Columbia.

“In hindsight, I can really see that was God’s plan. The city never hired anyone straight out of university, so I don’t really know how I got that job,” she says. “I was the youngest one there.”

Lieuwen focused on issues such as water quality. She went into ditches and creeks and took water samples, coordinated studies on garbage, compost, and recycling, and taught others how to be environmentally friendly. In her work for the city, Lieuwen was able to put the Christian worldview she had learned at Dordt into practice.

“I learned to see it not just as testing water quality, but as taking care of God’s creation,” says Lieuwen. “That’s why I do what I do. It brings meaning to the tasks.”

While working for the city, two of Lieuwen’s friends went on a trip with GAiN (Global Aid Network): a Christian humanitarian organization that coordinates projects such as microfinancing, water well projects and working with refugees. They told her about their experiences, and something about it struck her.

“I had always wanted to do something humanitarian with my engineering degree,” Lieuwen says. “But I didn’t know what that would look like. I did know that I wanted to work for a Christian company. What’s the point of doing it unless you’re doing it to share the love of God? But I also knew I needed to be certified as a professional engineer in Canada before doing anything else.”

Lieuwen was pulled but not quite convinced. The work required fundraising one’s own salary.

“I probably thought about it for a year,” she says. “I really think only God could have changed my mind. Because one morning, I just woke up and thought, ‘What’s the worst thing that could happen if I do this?’”
So Lieuwen applied at GAiN and immediately received an offer. Because she was still waiting for her engineering license, she told GAiN that she couldn’t take the job; the timing wasn’t right.

The license came in the mail two days later.

“That was the moment I knew: this is God,” says Lieuwen. “I called GAiN back and asked if the offer still stood. It did. So I took it. There aren’t many professional engineers who quit their job the week they get their license. I don’t know if I would advise it. But that’s what I did.”

Today, Lieuwen does project management for GAiN, overseeing projects in Paraguay, Syria, Haiti, Iraq, and Lebanon. She uses many of the skills learned in her time working for the city: managing projects, working with contractors, and making budgets. All of the projects happen alongside ministry programs, partnering with churches, demonstrating the love of God in word and in deed.

In Paraguay, Lieuwen works with a microfinance project to assist women living in severe poverty, issuing microloans that allow them to start their own businesses so they can provide for themselves and their families. In the Middle East, Lieuwen works with refugees and displaced people. GAiN partners with churches to hand out bags of blessing: food and nonfood items that displaced families need. Alongside both projects, people have an opportunity to learn and grow spiritually, if that is what they desire.

Lieuwen also leads teams of volunteers to the field. She’s taken one team to Lebanon, one team to Ukraine, and three teams to Paraguay.

“I really love helping other people experience how God is at work in the world,” she says. “It’s so fulfilling and rewarding; I feel like I’m making a difference. And the longer I’m here, the more I can look back and see that it was truly God who called me here. He is using my skills and abilities to be his hands and feet. It’s really humbling to know that we can be part of God’s redemptive work in the world.”