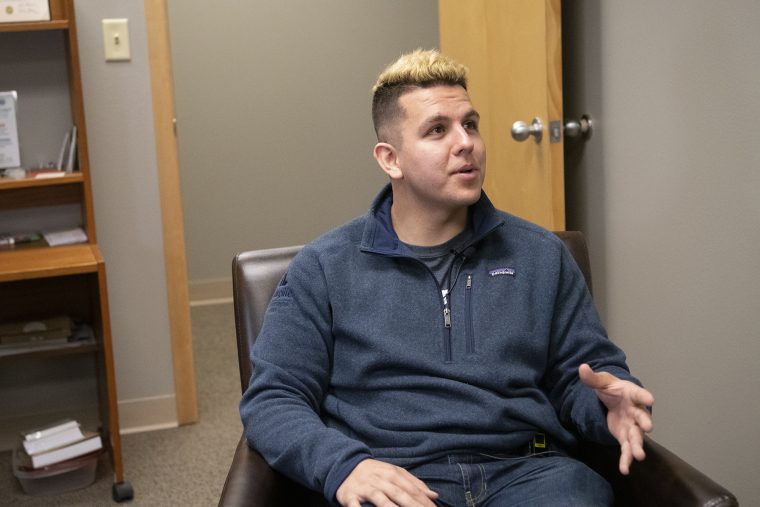 Alex Vasquez (’18) first heard about Young Life, a para-church organization, when he was a senior in high school in Dallas, Texas.

At the time, he felt that he’d achieved everything he’d ever wanted—he had great grades, a girlfriend, football success, and popularity. So, when, according to Vasquez, a “super corny and weird” guy approached him about attending Young Life’s meetings—called “club”—Vasquez turned him down. But the Young Life leader made time to talk with Vasquez to hear about his life, his struggles, and his dreams. After weeks of talking together, Vasquez decided he’d check out Young Life.

“My leader convinced me to go because he told me there would be cute girls there,” laughs Vasquez. “That was the first time I felt like I was being pursued by someone.”

Vasquez probably wouldn’t have guessed that, five years later, he would become the area director of Sioux County Young Life, nearly 800 miles north of his hometown.

As a senior in high school, Vasquez had heard about Jesus and the Gospel—it all sounded good, but he didn’t quite believe it. What he believed in was hard work, the American dream, and football.

“Football took me off the streets,” says Vasquez. “I was raised in a tough place in Dallas, and football got me out of trouble. It taught me discipline and teamwork. I learned how to trust others, to stay disciplined, and to work hard toward a common goal.”

Football is important in Texas, and when Vasquez played he felt like he was representing more than just himself. His hard work and diligence showed—colleges and universities from across the United States showed up to watch him play.

One such school was Dordt. Vasquez recalls how, when he heard that a football coach from Sioux Center, Iowa, wanted to talk with him, he was skeptical. He could hardly point to Iowa on the map, much less get excited about attending college there. Vasquez told the coach that there was no way he’d end up at Dordt. Still, he applied to Dordt and stayed in touch with Dordt’s football coach.

Months later, after finding out that that his FAFSA form showed that he didn’t qualify for federal aid, Vasquez called every coach at every college where he’d applied to see what his financial aid options might be.

“Many colleges told me, ‘That’s all we have,’” says Vasquez. “Dordt was the only college that called me back and said, ‘We want to make this work, and we’ll figure something out for you.’”

As with Young Life, Vasquez felt pursued by Dordt. He knew that God was pursuing him, too—attending Young Life and hearing God’s word was changing something in him.

“I felt I was being prepared for something—I just wasn’t exactly sure what,” says Vasquez.

Vasquez says he came to Dordt as a baby Christian. He recalls how, in a biblical foundations course during his freshman year, he put a lot of pressure on himself to excel spiritually. Far from home and tired of the cold, he thought about transferring back to Texas. But he stuck it out and, as he made more friends and got to know his professors, his connections grew and so did his faith.

Academically, he worked hard. He knew he wanted to help others, so he majored in exercise science and minored in psychology and biomedical sciences. His goal was to become a life coach.

“I wanted to help people get healthy, to fix their injuries, and to learn about their bodies,” says Vasquez.

But he missed Young Life.

“Many Dordt students I talked to had attended Young Life in high school, but Dordt didn’t offer it,” says Vasquez. “I also remember walking around the Sioux Center high school and seeing many kids who weren’t being reached by the local church—specifically the Hispanic community.”

Then, shortly before Vasquez graduated from Dordt, Young Life reached out to him. The organization was looking to expand into more rural locations, and they’d heard about his interest in Northwest Iowa.

“They told me, ‘Hey, you’ve brought a lot of attention to Young Life in Sioux County. Is this something you’d like to focus on after graduation?’” recalls Vasquez.

There was just one problem: Vasquez had received a job offer from the Dallas Cowboys.

“That was my dream job at the time,” he says. “I’d made a lot of connections in Dallas through friends who played professional sports in the NFL and NBA. When I was offered the job, it felt like a no-brainer.”

Except for the job offer from Young Life, where—once again—he felt pursued.

“I felt like Young Life sought after me. They threw a party the day I decided to accept the job, and I knew that this is where I needed to be,” says Vasquez.

Young Life Sioux County is in its second year in Northwest Iowa, and it’s made a splash in the community. On a Monday evening once a month, students show up for the Young Life club meeting. One month, they threw a birthday bash; another month, they held a Winter Olympics competition. The gatherings serve as a party with a purpose—at the end of each gathering, they share a short message about God.

On an average day, Vasquez talks with donors about fundraising efforts, grabs coffee with local pastors, trains students to lead, and meets with local students. Every day is different, which he enjoys. He is making a difference in the lives of Sioux County kids, as his Young Life leaders did for him when he was a high school senior in Dallas.

In some ways, Vasquez’s role as area director for Young Life Sioux County helps create bridges within the local community. He bridges gaps between kids and adults, but he also bridges the gap between Hispanic and white communities in Sioux County. He volunteers with Juntos, a program promoting higher education within the Hispanic community. Vasquez has also been part of several panels about immigration and faith, at Northwestern College as well as at Dordt.

The topic of immigration is close to his heart. When Vasquez was five years old, his parents fled Colombia, escaping a country marred by violence and drugs.

“When we came to the United States, we hoped for a better life,” he says. “It was a lot harder than we thought. My sister and I grew up poor. I just remember struggling.”

Part of that lived struggle continues. Vasquez is a Deferred Action for Childhood Arrivals (DACA) recipient, an immigration policy with an uncertain future.

“I know what it’s like to live in fear and confusion. I want to pursue a legal way to be in the United States because this country is what I know but, at the same time, as a Christian, I know that this existence is temporary and that, one day, I’ll be able to return to God,” says Vasquez.

When speaking on panels about immigration issues, Vasquez reminds listeners that when we use words like “immigrants” or “migrants,” we’re talking about humans.

“These are people who are just like you and me. They want to have a life of freedom, where they can work alongside others toward a common goal,” he says. “I encourage people to get educated and ask questions. When you listen to someone who’s been marginalized, it provides room to relate to one another.”

Sometimes Vasquez wonders if when we say, “love your neighbor as yourself,” we mean it.

“What Jesus did on the cross united all of us and welcomed us all back into his kingdom. But when our neighbor next door is different from us, I don’t think we look at them the same way God sees them,” he says. “As Christians, we’re meant to be set apart. Part of that means educating ourselves, doing life with and really caring for people who are different from you.”

That’s why Vasquez believes his work with Young Life Sioux County is so vital—he is pursuing the marginalized in an effort to win them for Christ.

“I’m excited for where Young Life is going and what’s happening in Sioux County,” he says. “God has picked me up and provided for me, and I get to do what I love. I’m thankful everything has worked together and that God has allowed me to be here.”