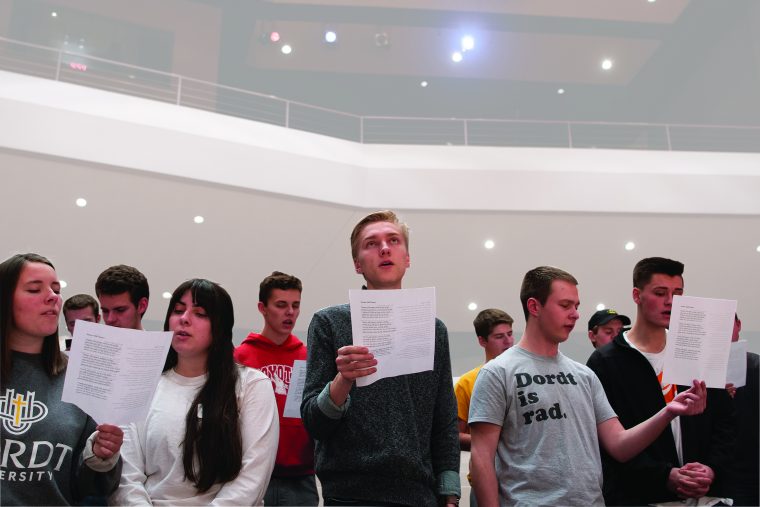 Jake Thorsteinson is a pre-med student with a passion for playing the organ.

“My joke is that I do the organs on the inside of the body and on the outside,” he laughs.

After years of piano lessons, he started playing the organ during his junior year of high school when someone gave his family an electric organ. He enjoys the structure of the organ—its blended harmonies and its volume. It’s also a familiar instrument for him; until recently, his home church in Edmonton, Alberta, only played the organ during worship services.

“I received a scholarship to play organ at Dordt, and that helped to seal the deal for me as to where I’d go to school,” he says. “Playing the organ is a great stress reliever for me, and it’s a huge passion. I can connect with God through it, especially through hymns.”

As a freshman, Thorsteinson was surprised to find that the Casavant organ in the B.J. Haan Auditorium was only played during practices or concerts, not during chapel. He enjoyed the on-campus contemporary worship style, but he also missed the organ. He talked with other organ students about the possibility of starting a hymn sing—a time when students could gather around the organ and sing hymns together.

Now a sophomore, Thorsteinson pitched his hymn sing idea to Dr. Carrie (Spronk, ’06) Groenewold, Dordt’s new organ and keyboard professor. She loved the idea and encouraged him to make something happen. He talked with three other organ students about setting up a low-key event in the organ loft. They met a couple of weeks beforehand to pick out hymns and to practice.

They expected a handful of their friends to show up for the first event on October 1. Instead, 50 students packed the organ loft.

“We were blown away,” says Thorsteinson.

Now, hymn sings are a monthly occurrence. At the Christmas hymn sing, more than 100 students gathered in the dimly-lit B.J. Haan Auditorium to sing traditional Christmas carols. Thorsteinson says he would love it if hymn sings happened once a week, but once a month is enough for now.

“There is a lot of prep work that goes into the hymn sings,” he says. “You have to learn the songs from scratch and get up to speed, and then you have to pick your verses and registration. I have respect for church organists that have to figure this all out every week.”

Thorsteinson believes that diversity in worship is important and that contemporary worship music has its place. He also appreciates hymns because, having grown up with them, they bring him a certain comfort and nostalgia.

“I also think it’s important to guard the words you’re singing. Hymns are time-tested and theologically sound. Especially when we sing the Psalms—my mom once told me, ‘The reason why it’s important to sing Psalms is because we’re literally singing God’s words back to him.’ It not only connects the Christian faith across generations but it’s also God’s inspired word. That’s really powerful.”

Thorsteinson is glad to see the Casavant organ being used to its full potential. He is also thankful Groenewold encouraged him to pursue his dream to organize hymn sings at Dordt.

“I praise God for this opportunity. Organizing hymn sings is such a cool experience, and Dordt’s the only place, in my mind, where this could have come together.”