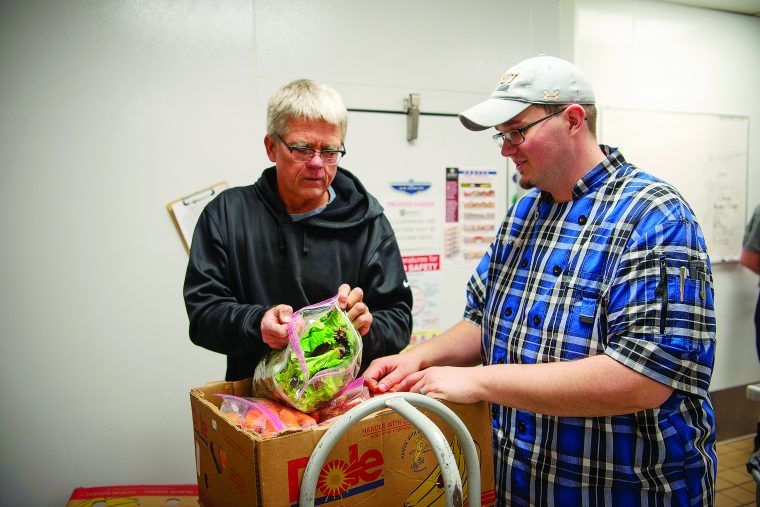 Fields and farmland surround Dordt University, and Dordt’s food service provider is committed to taking full advantage of that privilege.

In the past four years, Dordt Dining Services, led by Head Chef Nick Lawrence, has purchased locally grown food as often as possible.

“When we buy from local farmers, we know where our food is coming from,” says Lawrence, who has been passionate about eating locally grown food since culinary school. “When I purchase cattle from the Agriculture Stewardship Center at Dordt, I know who raised them. I can find out what they were fed, and, if I want, I can go see the cattle. You are making a connection with the food and the people growing it. This is something that I think is missing in today’s world—people don’t know where their food is coming from anymore.”

In the summer and fall of 2019, Dordt Dining bought 7,681 pounds of Dordt Agriculture Stewardship Center beef and 5,090 pounds of potatoes, 850 pounds of carrots, and 450 pounds of zucchini—among other things—from local farms. Much of this produce comes from the Cornucopia, a small organic vegetable, poultry, and pork farm run by the Wesselius family in Sioux Center.

“Our relationship with Dordt Dining has grown incrementally,” says John Wesselius (‘85), who runs the Cornucopia. “When they first took over the food service at Dordt, they phoned me, looking for kabocha sunshine squash for a special dinner. That type of squash is not available off a truck—but I grow it. So, I delivered it.”

Next growing season, Wesselius and Lawrence began discussions about how Dordt Dining could buy more produce from the Cornucopia. “I enjoy growing vegetables, and I enjoy bantering with people like Nick, who cook the vegetables,” says Wesselius. “One of the reasons I farm is for the relationships. We farmers are growing relationships with God’s creation and with people. Is there a happier thing to do in life than to invest in these relationships?”

Lawrence has also been working for the past two years with Dr. Duane Bajema (’71), professor emeritus of agriculture, to provide Dordt students with honey. Bajema maintains beehives on his acreage and at the Agriculture Stewardship Center, and he delivers about five gallons of honey from these bees to Dordt Dining each month.

“I appreciate working with Nick and Dordt Dining. If there’s a problem, we work together to solve it,” says Bajema. “Buying locally allows you to establish these kinds of relationships; it allows you to care for the people you work with while supporting the local economy.”

Buying locally sometimes takes more investment than buying food from big retailers. Because locally grown food is often of higher quality than imported food, it also tends to cost more. And, local farmers are restricted by Sioux County’s climate, so some foods simply cannot be grown locally. However, Dordt Dining, the local farmers, and students agree that the result is worth the investment.

“Local food is delicious! Once you become accustomed to the flavors of local produce, it’s hard to want to eat anything else,” says Gretchen (Rops, ’17) Kooyenga, who works at the Cornucopia—a job she first began as a Dordt student. “Most people aren’t going to eat completely locally grown diets, but any steps to incorporate local food is important and makes a difference to the consumer, the farmer, and creation.”