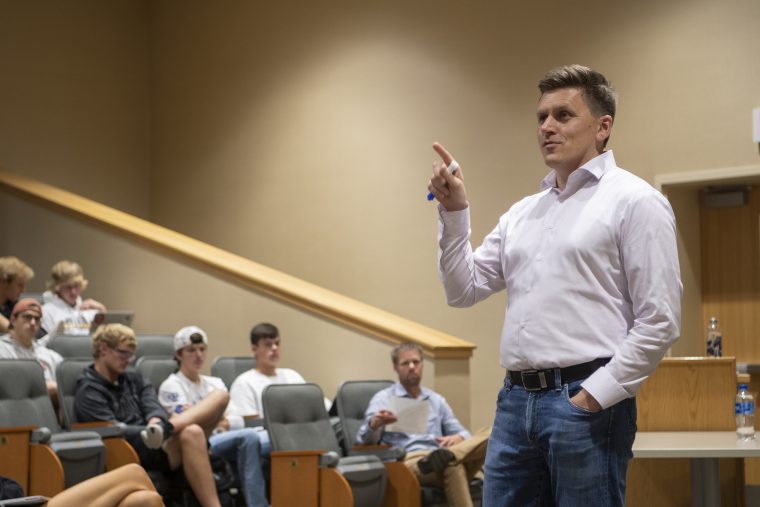 “Every experience in life influences you,” says Leonard Gooz (‘02). “Your family, your community, the friends you surround yourself with.”

Gooz can point to many experiences over the years that have led him to his current position as vice president for customer experience and innovation at Hilton, where he works with brands like DoubleTree and Embassy Suites.

His life today in McLean, Virginia, is quite different from that of his childhood. Gooz grew up in Slovakia—formerly Czechoslovakia—in a Christian household. His father was a Christian Reformed Church pastor, so faith was always part of his identity. Eventually his father became the general secretary of the church of Slovakia and ran a publishing company called the Bible Society. Gooz’s mother worked as a controller at a national bank in Slovakia.

“It was an interesting childhood because, until I was about 12 years old, I grew up under the influence of Soviet communist regimes,” he says. “It was a unique privilege to see how a society turns from a socialist to a market capitalist society—to see the market forces and trends that come into place.”

Visit Slovakia today, and you might not see much difference from United States in terms of quality of life, says Gooz. But back when Gooz was 18 years old, his family had a combined household income of $5,000 a year—not nearly enough to pay for college tuition in the United States.

Gooz first considered going to the United States for college because of Mike Hollander. A successful hotel owner and developer from Lynden, Washington, Hollander was also passionate about helping orphanages around the world through a non-profit organization. While in Slovakia, Hollander connected with Gooz’s father about sponsoring orphanages in Romania. The two men became friends; eventually, Hollander invited young Leonard, who was in high school, to spend the summer at his home in Lynden.

“One day, we were out walking and Mike said, ‘Leonard, you should consider studying in the U.S.,’” he recalls. “It had never crossed my mind. But as I figured out what it would take—a combination of standardized testing, good grades, and a baseline understanding of the English language—I decided to try.”

Gooz worked hard academically and applied for scholarships to be able to afford a college education in the United States. After applying to several Christian universities, Gooz picked Dordt. He arrived in Sioux Center sight unseen and was surprised to find it was nestled within cornfields and cow pastures. Having experienced cities like Los Angeles and Seattle, he had originally pictured studying in a vibrant, urban setting. As he adjusted to college life, he grew to appreciate the people and the academic environment Dordt provided.

“What I loved the most about Dordt were the connections and opportunities studying here afforded me,” he says. “Through Dordt, I was able to study in the Middle East for six months and in Washington, D.C., for six months. Those learning experiences set me up well for graduate-level education down the line.”

“At 18 or 20, you think you have all the answers to the world’s problems,” he chuckles. “At 18, we’re ambitious, idealistic, and want to change the world. If you throw together students from different backgrounds into one dorm building, everyone comes in with their own personal beliefs shaped by their parents or the communities they live in.”

He recalls sitting in a dorm room with friends from Kazakhstan, Azerbaijan, and Sioux Center, just telling stories. “When you hear people’s personal stories come to life, you realize you don’t have everything figured out,” says Gooz. “Here we are with our own personal beliefs and biases, and we can challenge one another. Those were some of the great moments I had in college.”

He also grew in other ways.

“Dordt gave me a very strong faith-based foundation. You learn how to use faith as a filter through which you start making decisions and through which you challenge yourself and your own biases to make decisions in accordance with how the biblical teachings are guiding us to do,” he says.
Throughout college, Gooz thought he wanted to become a lawyer. He studied political science and history; he worked for a Sioux County prosecutor. He planned to attend law school, but during his senior year something changed.

“I realized I liked the dynamic, faster-paced environment of business. I liked working in teams. I liked traveling and having an impact internationally,” he says.

So, after graduation, he worked his way from sales to a managerial role at Automatic Data Processing (ADP), which provides human resources management software and services. He learned how to build and lead a team—how to motivate and inspire people—and what it was like to work in a corporate environment. He self-funded his graduate level education, enrolling in American University’s MBA program. After he graduated, Gallup knocked on his door.

“They use science to help organizations better design customer experiences or build thriving workplace environments. I admired Gallup, so I was thrilled to join their team.”

He worked as a consultant for Gallup for six years.

“I probably learned more in my consulting days than I ever had before, because I had different clients, challenges, and industries I needed to balance.”

From there, he moved to Ernst and Young. Although he enjoyed the work, he quickly figured out that the position wasn’t what he was looking for. He recalled his summers spent at Hollander’s hotel, where he worked nearly every job available at a hotel—folding sheets, driving the limo, helping with maintenance needs, and more—and missed the hospitality industry.

“I remember power-washing during the day and then running the front desk in the evening,” he says. “I really fell in love with the hotel business during my college years. Then, when I worked in consulting, I learned the branding strategy side of business.”

Three years ago, when Hilton approached Gooz about a position as vice president for customer experience and innovation, he took it.

“It’s been the best opportunity for me. I am able to merge my interest in operations with branding to build a successful, consumer-focused brand,” he says. “We have an incredible team and brand, and we’re making a true difference in the world.”

With 6,000 hotels across 125 countries, Hilton is comprised of 18 brands, including Hilton Garden Inn, Homewood Suites, and Hampton. Gooz leads a team of 25 people. A complex, fast-moving global organization, Hilton has many fierce competitors, which makes Gooz’s role in customer experience and innovation very important.

“It takes a lot of vigilance, research, and quick deployment,” says Gooz. “Every single day, Hilton opens 1.5 hotels globally. So, my team obsesses about how we get our brands to be first choice for our guests, no matter what location or trip occasion, and first choice for our owners, so they can continue to build our brands and invest in the communities they serve.”

Looking back, Gooz is thankful for the ways his Dordt experience shaped his life.

“Had it not been for Dordt, I would have floundered a lot more in terms of decisions later in life,” he says. “And, look, everyone goes through their ups and downs—there’s no such thing as a perpetual upward line. But I think having that faith-based foundation allows you to endure some of the ups and downs, to endure some of the mistakes you’ve made, and to keep you focused on areas that matter most.”