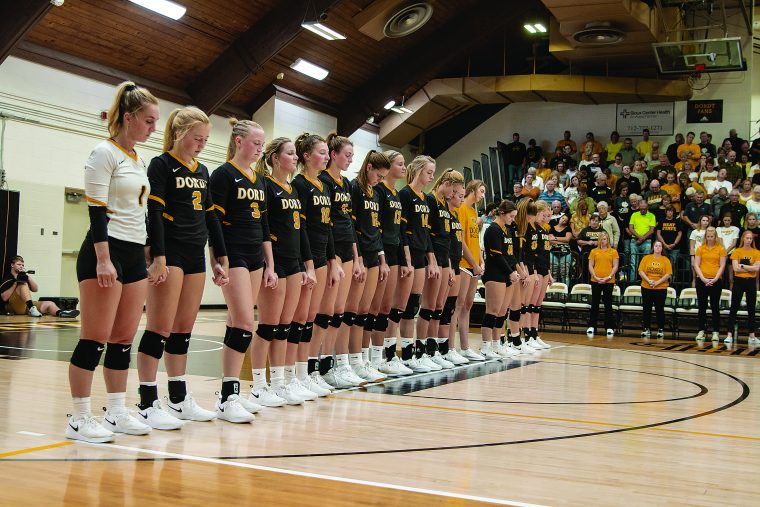 Three sets of sisters were in the Defenders lineup for the 2019-20 season.

When Dordt’s volleyball team opened pre-season practice in the fall, three of the incoming freshmen were greeted by older sisters who are already at Dordt and play volleyball. Ally and Brenna Krommendyk, Erica and Emma Bousema, and Allison “Alli” and Corrina “Jo” Timmermans make up a significant part of the Defender team.

Having siblings on the team is nothing new for Dordt’s volleyball coach, Chad Hanson, who has been leading the program since 2010. Recruiting a younger sibling may seem natural or easy from the outside, but Hanson treats each new recruit as an individual player.

“When I recruit a younger sister to our program, one of my first goals is to let them know we want them here because of who they are and what they can bring to Dordt. We also want them here because we know we can help them grow and become stronger in every area of their life. I tell them that this is not their sister’s school; rather, this is their school, and my hope is they will see it the same way,” says Hanson.

Ally Krommendyk, the only senior in the group, explained the role she played in recruiting Brenna.

“I tried to stay neutral and encourage her to pick the school she felt was the best fit for her. I was honest and gave her advice as to what to look for and what to be cautious about,” says Ally. “It was fun to see her meet and interact with my teammates.”

Brenna was attracted to Dordt volleyball not only through Ally’s encouragement but by what she was able to observe closely with a sister in the program.

“I saw how much fun Ally had in the program, and how it seemed to enrich her college experience. I did not particularly want to follow my sister through high school and then college, to be honest, but I came to be familiar with the volleyball program, and I knew I would enjoy it, too,” says Brenna.
For Emma Bousema, being able to play volleyball with her sister proved to be a strong pull.

“She is one of my best friends, and we have so many memories together,” says Bousema. “Being able to have those memories while playing a sport we love is a blessing. We encourage each other and always have each other’s back both in volleyball and life.”

Interestingly, Erica Bousema only recently transitioned from being the “little” sister to the “big” sister when a third Bousema sister, Kenzie, graduated from Dordt in 2019.

“Growing up together, putting in hour after hour of practice, it is the best feeling that we are on the same team at the college level,” says Erica. “She always knows what I need to hear and knows when to say nothing, and I think that comes with growing up in the same house for 19 years.”

For the Timmermans, 2019 was a little different. A sophomore at the time, Alli transferred to Dordt for the spring semester and made the decision a couple months after Jo had committed to the program as a high school senior. Both faced injuries; Alli missed the year after tearing a muscle in her abdomen, and Jo also missed significant time with an ankle sprain midway through the year.

“We provided each other with moral support and encouragement. I wanted to see Jo back out on the court as soon as possible, and I wish I could have played with her this season. We also helped remind each other to stay on track to recovery,” says Alli. “I really enjoy being on the same team with my sister; it provides us with an opportunity to grow together, athletically, as teammates and as people.”

Hanson is quick to point out that the relationships the sisters and the entire team develop are important and a part of overarching goals Hanson has for his team.

“Seeing sisters’ special bond in their interactions with one another, the direct manner in which they can speak to each other, and the ways that they protect each other are all prime examples of a committed and faithful love that Christ asked us to live out each day,” says Hanson.