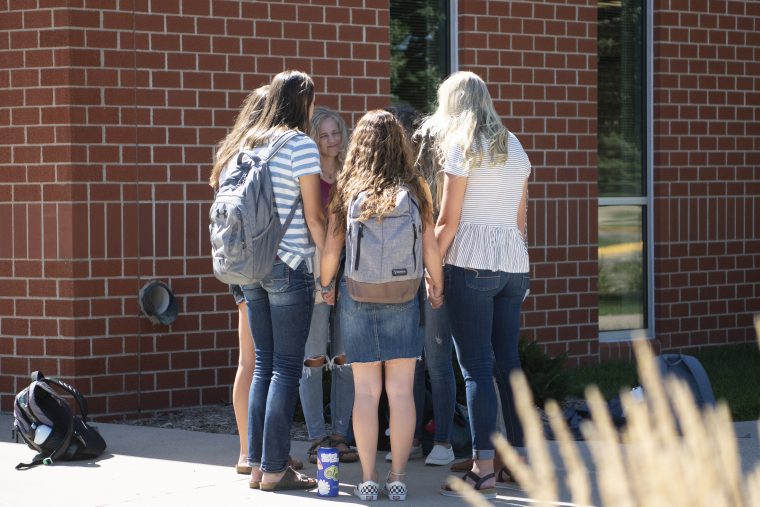 Tyler Postma had an abrupt end to his senior year at Dordt University. In March, he traveled back to his hometown of Abbotsford, British Columbia, and spent the rest of the spring semester working on online classes to finish up his business degree.

In April, he learned that he’d be getting a billing adjustment for partial room and board credits for on-campus residential hall closures. Rather than asking Dordt to issue him a billing adjustment check for the full amount, Postma donated part of his adjustment to the Hope Fund, a fundraising effort started by Dordt’s development office to help Dordt students with financial hardships due to COVID-19. He also took to social media to encourage other students to donate, too.

“This is money for our friends, our classmates, and maybe even our roommates who need financial support,” he wrote. “Let’s show that we love our friends. Let’s show that when times are tough that, not just Defender Nation, but current students are generous. Let’s have faith in Jesus that he will multiply our giving.”

How Dordt students are willing to give back during a pandemic will show their character, added Postma.

“True character is revealed when things are tense, when decisions like this are hard, and when we’re no longer in a comfortable situation,” he says. “I’m not asking you to give everything—trust me, I know Dordt is hard to pay for—but please give something to your friends who need it right now.”

Postma wasn’t the only graduating senior to give to the Hope Fund. Caitie Fagen, a theology major, also gave part of her billing adjustment.

“I donated to the Hope Fund partially because I understand firsthand the financial hardships—and hardships in general—some may be facing during COVID-19,” she says. “Dordt University is a large investment, but it has been so worth every penny in my four years here. I want to give back to the community I’ve grown so fond of and help members of that community to grow closer to our Lord, Jesus Christ.”

The Hope Fund has raised more than $569,000 so far, with a goal of reaching $750,000. Over 90 Dordt students gave more than $47,000 back to the Hope Fund, including many graduating seniors heading into an uncertain job market and financial future.

“There have been nearly 500 gifts in total—130 of which were first-time gifts,” says Lyle Huisman, director of development. “This clearly tells us that the Dordt community understands the financial needs students are facing, and people are responding joyfully and with generosity.”

In talking with families, Harlan Harmelink, director of financial aid, has seen how crucial the Hope Fund will be when it comes to helping Dordt students return to campus in the fall. Some students have lost summer jobs, which helps them pay for expenses during the academic year. Some have watched their parents get furloughed or laid off from work. Some have had to step in as primary caretakers for siblings or as breadwinners for their families.

“College is a very formative time for 18-22-year-olds. If the Hope Fund can allow these students to continue toward their goal of achieving a degree from Dordt, that could significantly impact the trajectory of their lives,” says Harmelink. “It is our prayer that as students are blessed through the Hope Fund today, they will give thanks to God for his provision and, should an opportunity present itself, they will be a blessing to help others whom God may place in their lives in the future.”

Huisman says the Hope Fund reminds him of God’s faithfulness.

“In early March, we couldn’t have imagined that, during a global pandemic, God would work in the hearts of hundreds of people through the Hope Fund,” he says. “We feel God’s hand of guidance even during troubled times. He has provided the Hope Fund as an example of trusting in his goodness. All one can say is Soli deo Gloria—‘to God alone be the glory! ’”

Hayley Visser, a senior education major, also gave part of her billing adjustment back to Dordt. At the time, she was searching for a job while also grappling with the sudden end to her senior year. Still, she donated to the Hope Fund as a way of trusting God.

“I chose to donate some of my billing adjustment to the Hope Fund because I am so grateful for the last four years I have had at Dordt, and I want other students to have the same opportunity to experience what high-quality, Christ-centered, student-focused education looks like,” she says. “The people at Dordt are second to none, and I would do these last four years all over again if I could. I don’t want students to have to step away from Dordt solely for financial reasons, so I desire my donation to hopefully assist in making Dordt a reality for them. I am continuing to learn to trust the Lord in this new graduation-and-job-search season of life, just as I’m sure numerous students are trusting him to move mountains for their return to campus next fall. Getting to play a small role in that is truly an honor.”

To donate to the Hope Fund, visit dordt.edu/hope.