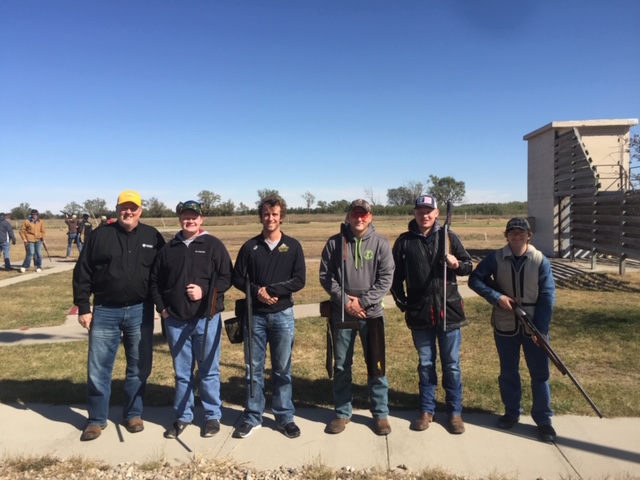 Dubbed the Defender Clay Dusters, Dordt’s trapshooting club is one of the newest and most popular sports clubs on campus.

“We’re a group of people with a shared interest in shooting,” says Dr. Tom Prinsen, communication professor and the trapshooting club’s faculty adviser. “Our mission is to provide opportunities for education, training, and mentoring of students in a safe, ethical, and Christian manner in use of firearms in a competitive and recreational environment.”

Jason Enerson, a sophomore engineering major who founded the Defender Clay Dusters club, drummed up interest in the trapshooting club even before he was a Dordt student.

“During my senior year of high school, I took a day off of school to come to Sioux Center to participate at Dordt’s club fair,” he says.

As a high school senior, Enerson was well-versed in trapshooting. After qualifying for the 4-H National Invitational during his first-ever competition as an eighth grader, he quickly became a star shooter at his local high school for five seasons.

“It gives me a chance to stop thinking about anything else. It’s just me, my gun, and a bunch of targets to break,” says Enerson.

He knew it would be easy to attend college and shoot in the local adults’ league, but as a high school senior he was coming off his third and final year as a 4-H Shooting Sports ambassador.

“I loved helping other people get into shooting, and I wanted to do that at Dordt,” he says.

And that’s how he ended up at the Dordt club fair as a high school senior, making a pitch to his future classmates as to why they should sign up for a trapshooting club. By the end of the club fair, 28 people had signed up for trapshooting, including Prinsen.

“Professor Prinsen and I laugh about how we got connected,” says Enerson. “He was the second person to sign up for the club. He thought he was signing up to get a chance to shoot more, but he ended up becoming our faculty adviser.”

During a normal academic year, more than 20 students gather each week at the Rock Valley Gun Club to shoot.

“Our shoots are laid-back, but you do have some people like me that want to shoot the best they can at every competition,” says Enerson. “What makes shooting so great is that skill level doesn’t matter, and anyone can shoot at a competition.”

“Five people shoot at a time, so the rest of us have a little down time to check in with each other and to talk a little shop,” adds Prinsen. “It really is a sport for everyone. There is no advantage for being male or female, tall or short, fast or slow.”

The club had its first competitive shoot last fall in Grand Island, Nebraska; they have plans to participate in a new four-year division of the Scholastic Clay Target Program, which includes schools like Simpson College, Coe College, and Upper Iowa University.

Prinsen is a competitive shooter in his own right. Recently, he attended the Amateur Trapshooting Association shoot in Mitchell, South Dakota, where he won his division in singles both days. He scored a second in doubles on the first day and won his division on the second day.

“Doing my own shooting has made me a better coach and adviser,” says Prinsen. “Although I’m a relatively new shooter, I have fired around 10,000 rounds over the past two years and have improved greatly. Throughout this time, I’ve learned a lot about gun fit, patterning, stance, and the mental challenges that go along with shooting. I’m an analytical person by nature, and I love to teach, so I have been able to break down the shooting process into pieces that new and seasoned shooters can use.”

Prinsen says trapshooting is something anyone can do.

“While you’re shooting, you need to focus enough that you forget about classes and responsibilities for a while, plus you get to hang out with new and old friends away from your dorm or apartment. In short, it’s a fun way for students to engage with each other and learn how to relax while also remaining focused.”