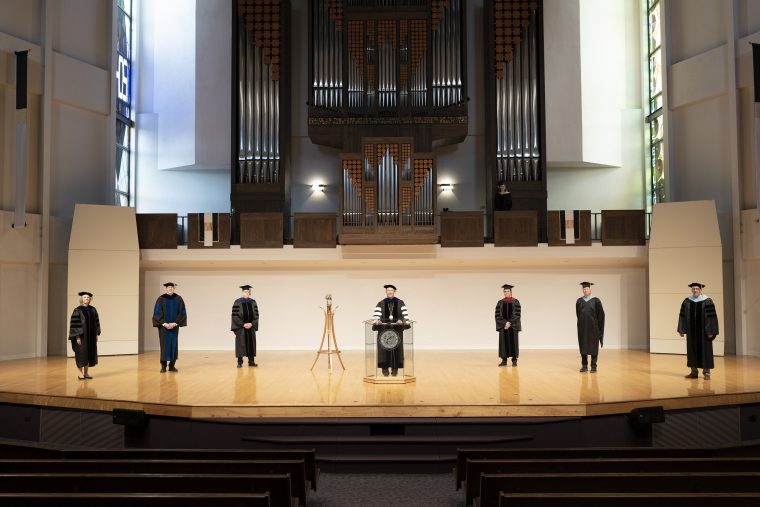 During the COVID-19 worldwide pandemic, Dordt administration made the difficult decision to host a virtual commencement ceremony instead of an in-person one.

“We wanted to provide students and families with a meaningful experience that honors students’ achievements as graduates, even if we could not hold an in-person event in May,” say Brandon Huisman (’10), vice president for enrollment and marketing. “Forty percent of our student body come from 400 miles away or further, and we knew that many graduates would begin working or enroll in graduate school in the coming months, so they might not have the vacation time or the ability to return to campus if we postponed our commencement ceremony.”

Emi Stewart (’20) felt disappointed when she heard that there wouldn’t be an in-person ceremony. “Still, I knew that Dordt would do a great job,” she says. “If anyone was going to nail this virtual commencement thing, it was Dordt.”

When deciding how best to structure the virtual commencement ceremony, the planning team made sure to get input from graduating seniors.

“We wanted to know what parts of the commencement ceremony were most meaningful for graduates,” says Sarah (Groneck, ’10) Moss, director of marketing and communication. “Students said they wanted the ceremony to be efficient but personal. With that frame in mind, we worked on shortening what typically is a two hour-long ceremony to one hour’s worth of content.”

Theology Professor Dr. Justin Bailey served as commencement speaker, with an speech aptly titled “The Wisdom of Weakness: The Coronavirus and the Cross.”

“Our current crisis threatens to swallow the tremendous accomplishment of graduation and to leave us at the end of the journey with a bitter taste in our mouths,” says Bailey. “It is right for us to grieve our losses – both small and great – even as we refuse to be defined by them. And yet, the opportunity to commence the next chapter of life in the midst of the Coronavirus may prove to be an unexpected gift.”

Jon De Groot, former director of worship arts at Dordt, arranged a special music compilation of “Goodness of God” and “The Blessing.” The music video took viewers to multiple spots on campus, including the Prayer Garden, the De Witt Gymnasium, and the Hulst Library.

“We wanted to communicate that in every space on campus that students frequented, they had been watched over, cared for, and through it all God was still faithful,” says Jake Brouwer (’19), marketing videographer.

The musical performance was a hit both during the virtual commencement ceremony and afterward; the video is the most-watched video of all time on Dordt’s Facebook page, with over 62,000 views, 580 shares, and 95 comments.

“The music video was beautiful,” says Stewart. “Seeing the chapel team worship in the places on campus that I’ve spent the past four years was really moving. What a great reminder that God wants our praise, no matter where we are. That music video really encapsulated the bittersweet time we’re in right now – we’re celebrating our accomplishments, but we’re having to do so in a unique and isolated way.”

The class of 2020 graduates also received a commencement box, which included a cap and tassel, diploma cover, a one-of-a-kind Dordt University class of 2020 shirt, a gift from Dordt’s alumni association, and more.

“Students really appreciated the commencement box,” says Moss. “They were also encouraged to submit a photo of themselves wearing the class of 2020 shirt, which was included in the virtual commencement ceremony.”

The virtual commencement ceremony concluded with the concert choir singing the Dordt University alma mater. Dr. Ryan Smit (’99), instructor of music, and Josiah Culpepper, a digital media major, edited together a video of each choir member individually singing the alma mater, compiling it into a choir recording.

Dordt’s virtual commencement ceremony received plenty of positive feedback, and more than 1,500 people tuned in to watch the ceremony on Livestream. Even though the Dordt community would have preferred to celebrate in-person, the virtual ceremony was a nice way for graduates and their families to celebrate the important milestone of completing a college education.

“One thing I’ve come to really admire about Dordt is that it isn’t afraid to tackle difficult things head-on, but with that there is always hope,” says Stewart. “The virtual commencement was a prime example of how Dordt implements a Christ-centered hope and joy, all while facing the tough stuff of life. Even in unexpected, upside-down situations, we know our hope is not rooted in earthly expectations. The only thing we can truly expect is that God’s goodness will prevail, and I think the commencement ceremony shined a light on that truth.”