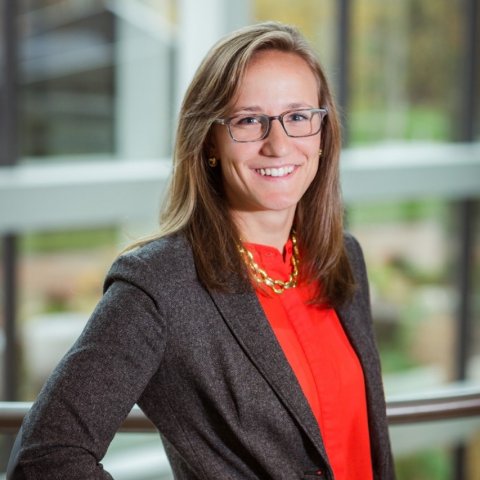 “I have always been interested in how things worked,” says Kate Du Mez (’10). As a child, Du Mez spent her free time building or fixing things; in school she particularly enjoyed her math and physics classes. “When I was preparing for college, engineering seemed like it could be a good fit with how my brain works.”

Deciding on a college was initially less straightforward, until Du Mez visited her sister who was studying at Dordt. “I visited a few schools, and at first I was just looking at schools that were interested in me playing basketball or soccer that also had engineering programs,” says Du Mez. When she visited Dordt in her junior year of high school, Dordt immediately felt more like home than any of the other schools she had visited.

“I think if you would have asked me in high school, I would have said that my grandparents’, aunts and uncles’, cousins’, and sisters’ ties to Dordt would have been a strike against it, because most high schoolers want to go their own way,” says Du Mez. “But, I think those ties really contributed to how comfortable and familiar Dordt felt. It was clear to me with all the people I met on my visit that everyone truly was invested in the well-being and growth of the students. And it definitely helped that I could play both basketball and soccer, because I wasn’t sure I would be able to choose between the two.”

While at Dordt, Du Mez found herself particularly intrigued by the “creation care” aspect of engineering. “I remember spending time in my classes talking about the passage in Genesis 2:15 where God places Adam in the Garden of Eden to ‘till and keep’ it,” says Du Mez. “I think those conversations really compelled me to seek out a career that wasn’t just about creating or developing, but that also stressed that call to the ‘keeping’ of creation.” At Dordt, engineering became more than a field at which Du Mez could excel; it became a vocation.

After graduating from Dordt with a degree in civil and mechanical engineering, Du Mez decided to pursue a master’s in building systems engineering at the University of Colorado – Boulder. “I knew I wanted to get into the field of sustainability in architecture, and while my engineering degree at Dordt was thorough, I also felt that it was broad.”

Du Mez thought that it would be prudent to gain specialized training before finding an architectural engineering job. “Looking back, I think I could have found a job in engineering immediately after graduating Dordt and excelled,” says Du Mez. “But my master’s program at CU Boulder exposed me to other skills and job options that were more specific to the industry that I wanted to go into.”

While working on her master’s degree, Du Mez began an internship at MKK Consulting Engineers, which became her first full-time engineering job after she graduated. Initially, she built energy models to predict the energy consumption of commercial building designs. Eventually, she decided that she wanted to get out from behind her desk more often, so she began working on their commissioning team, which tested heating, cooling, and lighting systems in newly constructed buildings. Du Mez found that she enjoyed the problem solving required in commissioning work.

“The transition from one to the other is quite a long story that I can say has fingerprints of God’s providence all over it. I am really grateful to have found a company to work for that highly prioritizes creation care, care for one another, and positive impacts on society,” says Du Mez. “One of the things that keeps me motivated in my work is that I feel tied to a larger mission that the work I do benefits society and creation by helping to produce a more sustainably built environment.”

Over the past 10 years, demand for commissioning work has increased as building codes have required new buildings to be more energy efficient. “This change in building codes has made the kind of testing that I do mandatory in many jurisdictions, which is some amount of job security for me, but I think the bigger impact is that it is helping reduce the carbon footprint of buildings on a wide scale, which I think is great. I think that will continue in the future,” says Du Mez.

Du Mez has also come to find developing relationships with coworkers, contractors, and other industry colleagues to be rewarding. “While I’ll always enjoy solving a tough engineering problem, I enjoy the people side of engineering more than I thought I would,” says Du Mez.

In her current job, Du Mez interacts with a variety of people each year, and she strives to treat each person with dignity. “The construction industry can sometimes be a tough one, and I try at minimum to bring a positive energy to the team and to each individual I interact with,” she says.

Du Mez continues to be grateful for her time at Dordt, which helped to prepare her for a job that requires both technical and interpersonal skills. “The education I received at Dordt was a very well-rounded one,” says Du Mez. “I think there are so many different ways that I was able to develop critical thinking, interpersonal, communication, and leadership skills without actually proactively seeking out any of those lessons. The way that education is approached at Dordt from the perspective of pursuing the redemption of all things created a foundation and worldview that I operate out of daily even on a subconscious level, which is invaluable.”