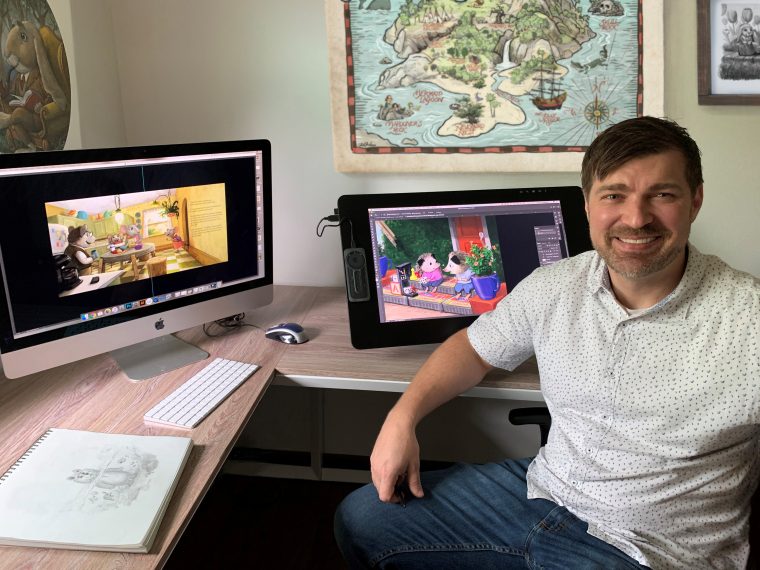 If he didn’t know the unique hazards of that particular day on the farm calendar, he should have. It was the day of sorting cattle, and any farm kid should know that the worst days of the year to screw up are those days. But screw up he did. Big time. He drove the pickup smack into the side of a corral while his dad and the help were sorting cattle. Not smart. Nope.

Joe Hoksbergen, who today sits comfortably in his studio and turns out fascinating, playful images for book illustrations, was a farm boy who was never really a farm boy. That day, he says, “One poor kid was perched on the side of the corral and got launched several feet.” Decidedly bad. “I was the clumsiest farm kid ever to work the Iowa soil.”

And then there was this, too, almost too embarrassing to repeat in public. His wind rows, the ones he left in the field when, early summer, he was cutting hay, were—take a deep breath here—not straight. You read that right. Joe Hoksbergen, who, professionally at least, goes by the name of Joe Hox, rather preferred making those rows sway a bit—“artistic,” he says, giving them a little life.

One way or another, what became apparent as early as second grade was that he wasn’t like other kids in his class because he loved, just loved, to draw, to create things with a pencil or pen, a crayon or a magic marker, to make things come alive on the paper in front of him. It was a second grade assignment every kid was given: create an Indian village. What he began to understand was that his second-grade classmates at Pella Christian School regarded his little paper figures as, well, wow!

Hoksbergen was very much at home on his parents’ Iowa farm, but couldn’t help but know he was not going to be sorting cattle when he graduated from Pella Christian. And that was fine with his father, who encouraged his son to line up his dreams of art and go after them. Instead, his father kept him supplied with what he needed to follow that dream. His mother’s encouragement grew out of her own work as a graphic designer. “To this day,” he says, “Mom and I love to brainstorm together.”

Thus, deciding on some kind of art for a future wasn’t at all difficult for him. “Art classes were paradise for me, growing up,” he says. “All the way through, I was blessed to have art teachers who gave me lots of freedom.” That freedom made his dreams as clear as they were vivid. “I realized I loved the idea of using art to tell stories.”

While he was at Dordt, he began to sense that book illustration was the kind of job and calling that made sense. He had decided on Dordt when his dad had determined to sell some beef cattle across the state at the Sioux Center auction barn. Joe came along; but he got himself sold on Dordt when he visited with Professor Jake Van Wyk, who, Joe claims, didn’t mind at all that this kid had dropped by with manure on his work shoes. “He seemed to understand the plight of an Iowa farm kid who wanted nothing more than to make art,” he remembers.

His college art classes confirmed his choices and his dreams and narrowed his career plans. “I spent my college career making art that garnered acclaim in critiques and earned me good grades,” but what dawned on him gradually was the importance of “a cohesive portfolio,” a body of work that would get his foot in the publishing door. What he set out for himself, post-grad, was day work for pay—and nights spent in the studio, “refining my illustration style.”

But his four years at Dordt resulted in much more than a sketchbook full of drawings. He joined choir, Concert Choir, where Professor Ben Kornelis remembers Joe occasionally looking down at his sketchbook, behavior Kornelis says could have made him ornery if what Joe was drawing hadn’t been so cute. “He used to draw me,” Kornelis says, chuckling. “I wish I still had some of those.”

When he wasn’t singing or sketching, Hoksbergen couldn’t help noticing a certain alto named Katie Boer, from South Holland, Illinois…and yes, this is one of those “choir tour romance” stories you may have heard about, although you’ll have to get the details from the two of them.

Hoksbergen and Boer were married in June of 2005, a month after graduating. They’re still a team, a great one, if you’re wondering. They’ve got four wonderful kids and plans for publications yet to come.

But then, the best laid plans of mice and men and artists. . .well, you know the rest. While still at Dordt, and then, after graduation, trying to establish himself as an artist (beginning as a mural painter), Joe found himself increasingly victimized by “severe body aches, brain fog, and fatigue,” symptoms eventually diagnosed as Lyme disease and CIRS (mold illness). His health went into decline just a few months into their marriage.

It’s hard to keep one’s head above water when what’s happening inside prompts a kind of lethargy. “My mind, once teeming with ideas, now felt muddled and depressed.” All that potential, all that challenge seemingly dried up. Things were difficult.

For a variety of good reasons, he and Katie decided the best path for the two them—and him—would be for Joe to take a job teaching art (grades two through 12) at Pella Christian, where, in what seemed a miracle, an opening had just occurred.

For 12 years, Hoksbergen taught art in the schools he had attended himself, a few of his later years behind the desk part-time. In the persistent languor of his Lyme’s disease, he did very little creative work; but then eventually new medical treatments slowly brought improvements, and he started to reopen those sketch books—doing all sorts of things and on Instagram posting things he’d created. Freelance work followed when people noticed his work, and his strength—and his imagination— returned.

During his summers, he stayed busy producing, sometime art pieces, sometimes free-lance graphic design, sometimes bare-wall murals. One of his first illustration jobs was for Beyond Control: Heart-Centered Classroom Climate and Discipline (2014), by Alan Bandstra (’89), published by Dordt Press. Bandstra was greatly pleased: “No matter how abstract the concept presented within my writing, Joe’s pictures nailed it. Every time.”

The more freelance work he did, the more contacts he accumulated and offers he considered. Vermeer Corporation asked him to illustrate Farmer Gary’s Birthday Adventure, a book to honor the corporation’s 70th anniversary. That series of freelance jobs, he says, “helped me to understand the process of design, layout and printing,” and thereby to grow as an artist and a professional.

These days he’s illustrating another book in a series called Good News for Little Hearts, from New Growth Press, books for children from three to eight years old, hardcover books New Growth says bring “biblical help and hope to issues every child faces.”  (See newgrowthpress.com). He says he and Katie were greatly taken with what they found at New Growth. He applied, and, blessedly, was invited to submit some drawings for this new series. What he gave them sealed the deal. His very first project for them was The Moon is Always Round, a stand-alone title designed to help families deal with infant loss. These days he’s working on his ninth book in the Good News for Little Hearts series, his tenth book in all for New Growth.

“We have always dreamed of publishing together,” he says, Katie writing, Joe illustrating. “We have lots of ideas and several different manuscripts we’re hoping to publish someday.”

Out of the classroom completely now, Joe Hox’s contract calls for more work from New Growth Press, including another stand-alone book, not unlike The Moon is Always Round.

One more thing. Just in case you’re wondering, his father sold the farm. Joe doesn’t hold on to dreams of one day proving himself in the cattle yard or leaving perfectly straight windrows behind him on a John Deere. He says, truth be told, he never was much of a farmer.

But ask him about his latest project, and his face will light up. “This summer I’ll be illustrating a book for Feeding Minds Press, an imprint of [go on, guess] American Farm Bureau Foundation for Agriculture.”