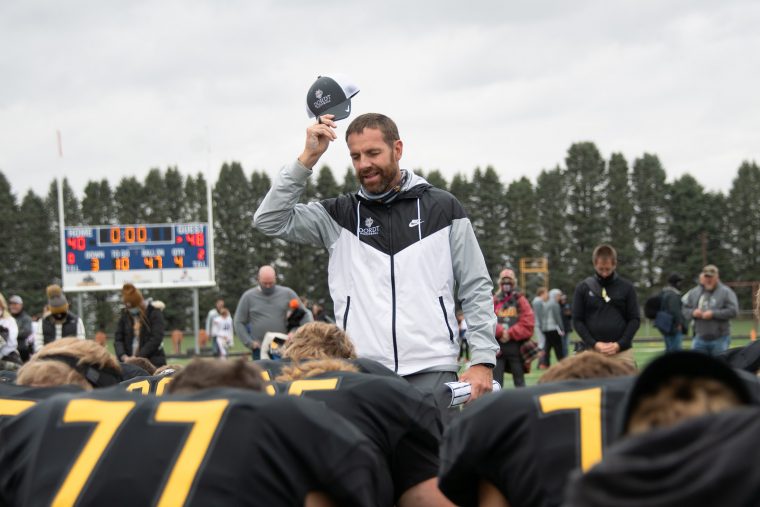 As protests for racial justice mounted across the nation and the world this summer, the Dordt football team considered what it means to tackle the topic of race not only as a team but as Christians.

“In order to do effective kingdom work, you have to run into fires—into places that are uncomfortable, in order to be a voice and a change in places that we need to see change,” says Levi Jungling, a senior.

They wrestled with this in a number of ways, including by forming a racial oneness group where players foster empathy and understanding by sharing their experiences with racial injustice.

“We’re all together, we’re all one, and we all believe in the same thing. The world might not see it that way—they may see it as a race thing, but when you’re a Christian, we’re all one,” says Ethan Thomas, a sophomore.

The athletic department’s work with racial justice caught the attention of Dordt’s marketing and communication office. Marketing Videographer Jake Brouwer (’19) put together a mini documentary that examines how Dordt’s football team is dealing with race and social justice issues from a Christ-centered perspective. Gathering nearly seven hours’ worth of footage, Brouwer spoke with coaches, players, and Athletic Director Ross Douma when putting together the documentary.

“I was proud of how every student, coach, and staff member was able to ground their perspective in the fact that everyone is made in the image of God and that Dordt is committed to supporting a Christian perspective,” says Brouwer.

The project reminded Brouwer of how God doesn’t call Christians to have the same opinion, but he does call us to love.

“It’s important to have these discussions as Christians because they re-center us under the banner of Christ rather than separating us into ‘us’ and ‘them.’”

To watch “Into the Fire,” visit youtu.be/HyibQbHp3Yk.