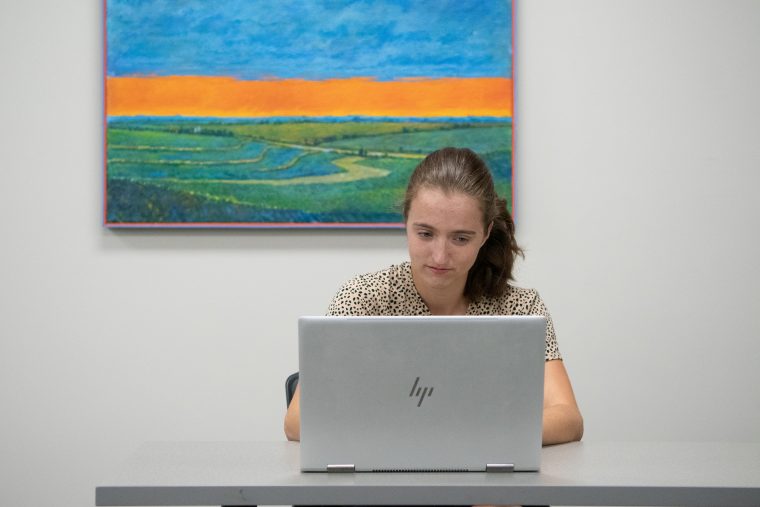 The Covid-19 pandemic has paused many people’s plans. But for three Dordt seniors, the pandemic simply changed their plans and, in the process, gave them new learning opportunities.

Julia Yoder, a business major, had planned to head to Fresno, California, for an internship with Amazon. She’d subleased an apartment and started researching which national parks she’d visit when she got the call that the internship was going virtual. Instead of a 10-week in-person internship focusing on loss prevention—related to people, products, and information—she began an eight-week virtual program that focused on Amazon as a company as well as specifics of loss prevention.

“We also designed a project to improve the company, and we presented that to senior leaders at the end of the summer,” she says. “That was intimidating at first because we hadn’t set foot in a fulfillment center. Through this, I was able to build my network, connect with my manager and mentor to develop this project, and gain an understanding of processes and procedures.”

Yoder participated in virtual networking socials with other Amazon interns both in North America and around the world, all from the comfort of her home in Sioux Falls, South Dakota. “I loved my internship with Amazon and would highly recommend it to others. Despite having to do my internship virtually, it was for the best, and I learned a lot through it.”

At the end of the summer, Amazon offered Yoder a full-time job as a loss prevention specialist. The catch? She won’t know at which fulfillment center she’ll work until sometime closer to graduation. “It’s a little nerve-wracking, but I am glad to have a job when many others don’t know what they’ll do for work when they graduate,” she says.

Business Major Caleb Pollema applied for an internship with Wells Fargo last November. He went through two rounds of phone interviews and three interviews with the Central Valley offices in California before he learned that he had landed an internship in his hometown of Bakersfield, California. He was to work as a financial analyst intern in the middle market banking segment within the food, beverage, and agribusiness industries.

In mid-April, Pollema found out the internship would be moving online and, instead of being 10 weeks in length, shortened to five weeks. “Wells Fargo was extremely professional throughout the whole process,” he says. “We ended up getting our own company laptops, which made working from home a little easier. They also honored their original financial commitment of 10 weeks’ worth of pay, which was fantastic.”

As part of more than 100 interns in the financial analyst program, Pollema says he learned a great deal and gained valuable hands-on experience. “Despite the remote environment, my mentor and my boss did a great job of keeping me busy,” he says. “Banking was uncharted territory as far as the finance world is concerned, so it was great learning something new.”

Like Yoder and Pollema, Brady Mackey, an agriculture missions major, spent his semester differently than expected because of the Covid-19 pandemic. He had planned to participate in an agriculture department-approved mission trip to Nicaragua that would also meet the intercultural credit requirement for his Spanish minor. Unfortunately, that trip was canceled. So Spanish Professor Rikki (Mueller, ’04) Brons helped Mackey create his own intercultural project. Now, partnering with Young Life Sioux Center, Mackey is spending his fall semester finding ways to engage with the Hispanic community in Sioux Center. At the end of the semester, he’ll present what he’s learned to the Young Life leadership team and to his Spanish conversation class.

“I want to provide them with examples of how I have been able to reach out to the Hispanic community, whether through tutoring at the high school or helping students with their college applications,” he says. “Yes, Covid-19 canceled and changed my plans, which stinks. But having the opportunity to pour myself into the Hispanic community here in Sioux Center is great.”