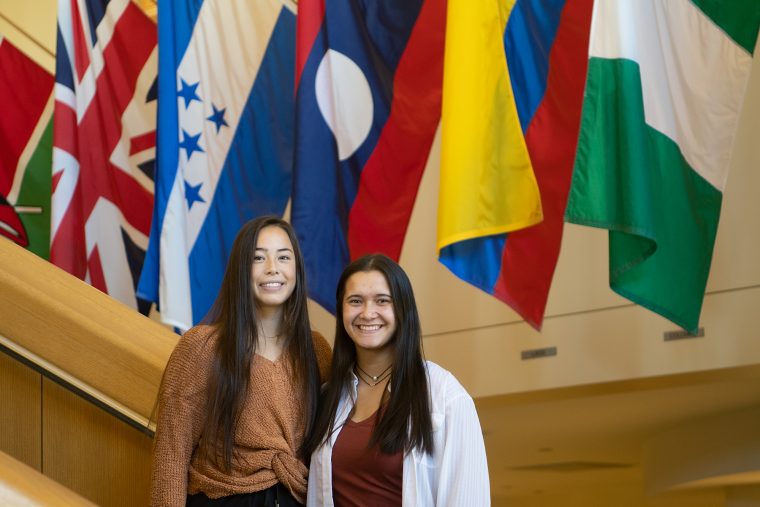 The flags that are hung in the Campus Center lobby signify the countries that Dordt students call home or have heritage from, including South Korea, South Africa, Jamaica, the Netherlands, and, as of this year, Laos.

As part of her role as Global Education Ambassador, Abigail Barrientos Bravo helps Coordinator of Off-Campus and Multicultural Studies Rebecca Tervo update the flags every year. Barrientos knew of two students, Aurora Xaysana and Sommer Schaap, who have Laotian heritage. When she noticed that the Laotian flag wasn’t included in the Campus Center, Barrientos reached out to Xaysana and Schaap to ask if they’d like to see the Laotian flag hung there. Both girls quickly agreed.

“I was a little surprised because I hadn’t thought about having our flag up there, but I also was excited,” says Xaysana.

Xaysana is from Edmonton, Alberta, but she grew up hearing stories of how her grandparents risked their lives to leave war-torn Laos and immigrate to Canada. Eventually Aurora’s grandmother opened up her own restaurant called Boualouang Laos and Thai Cuisine. “My grandma and grandpa have been such hard workers ever since,” she says.

Schaap also heard stories about her grandmother’s journey from Laos. “My mom was born in Laos, and she, my grandmother, and other family members came to the United States when she was six years old after spending a couple years in Thailand at a refugee camp,” says Schaap. “I’m very thankful for their perseverance and strength to get here.”

Schaap grew up in Edgerton, Minnesota. Over the last couple years, she has grown to appreciate her Laotian heritage even more, and she was thrilled to find out that the Laotian flag was going to be added to the Campus Center.

“I called my mom and started sobbing on the phone, because I was excited and honored that they would ask me to do that,” says Schaap.
Having the flags in the Campus Center serves as a reminder of the uniqueness of God’s creation, she says.

“As children of God, we are made in God’s image. We have brothers and sisters in Christ all over the world, and they come from different walks of life than we do. We should love them as who they’ve been created to be. We are part of a bigger picture.”

It is important, says Barrientos, to have a visual representation of the flags in the Campus Center for two reasons: honor and acknowledgement.
“It’s not enough to say, ‘Oh yeah, Dordt cares about diversity.’ Visual actions, such as hanging the flags, are necessary; it honors and acknowledges students’ identities,” says Barrientos. “When I see the Costa Rican flag, I think, ‘I am part of this community, even if I am not from the same place as everyone else, even if I don’t look like them, and even if I don’t speak their language from birth.’”