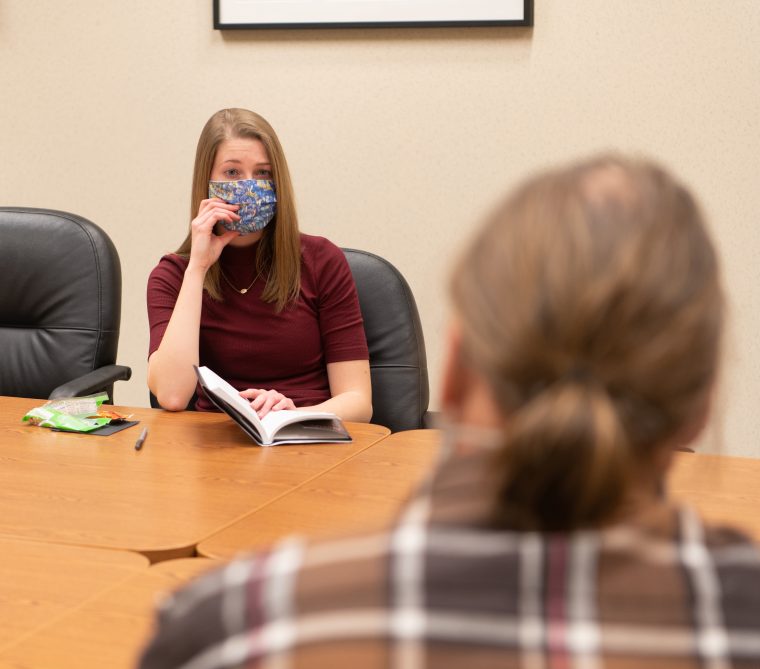 Every Friday at 11 a.m., a group of mask-clad students, faculty, and staff meet in a small glass classroom in the Ribbens Academic Complex.

Art Professor Matt Drissell welcomes them before settling down and pulling out an underlined, Post It-filled copy of Ibram X. Kendi’s How to be an Antiracist. Drissell is leading one of four discussion groups on Kendi’s book; five other groups on campus are discussing Jemar Tisby’s How to Fight Racism: Courageous Christianity and the Journey toward Racial Justice. These conversations are part of the “Rewiring for Diversity” project, which Drissell and English Professor Howard Schaap created with a goal of building more racially inclusive teaching and understandings at Dordt.
“In a reformational spirit, we will use these texts to ‘tear down’ and then ‘build back up’ our beliefs and behaviors regarding race and racism, rewiring for a thoroughly Christian understanding,” they explain in their project description.

More than 55 faculty, staff, and employees signed up to participate in the “Rewiring for Diversity” project this spring.

Tisby, who has spoken two times at Dordt, holds an M.Div. from Reformed Theological Seminary and is working on a Ph.D. in history at the University of Mississippi studying race, religion, and social movements in the 20th century. How to Fight Racism describes itself as “a handbook for pursuing racial justice with hands-on suggestions bolstered by real-world examples of change.”

As he leads a group through Tisby’s book, Schaap appreciates how Tisby doesn’t mince words and provides a pathway forward.

“For instance, he says the church must play an important role in racial justice because we’re guilty of racism and because we’ve got the larger story to explain why racial justice is important,” says Schaap. “He very much keeps the witness of the Black church in view in the book, but he makes clear that if we really want to move the needle on racial justice, it will take action and sacrifice.”

The founding director of the Boston University Center for Antiracist Research and the author of several New York Times bestsellers on the topic of antiracism, Kendi is the “foremost name tied to antiracism,” says Schaap. In How to be an Antiracist, Kendi “weaves an electrifying combination of ethics, history, law, and science with his own personal story of awakening to antiracism.”

“Because Kendi is not writing from a Christian perspective, though he grew up with Christian parents, we thought it offered the best chance to get outside ourselves here at Dordt, to try and see ourselves and our practices through a different lens,” says Schaap.

Drissell says Kendi’s assertion that we are all capable of racism and of using our power and privilege as a weapon against others shows why it’s important for Christians to discuss these difficult topics.

“An essential part of the Christian faith is an honesty about our brokenness, about the way we turn to sin and selfishness, so far away from God’s goodness and holiness,” says Drissell. “By being honest together, we can turn in a new direction, seeking to create a place where everyone truly can thrive, where everyone can be complete in all that God has made them to be.”

Freshman Annika Rynders likes how Kendi encourages readers to be “real with themselves”—to examine their own worldviews and motives. His honesty has prompted deep discussions and applications in her group.
“Our discussions are centered around genuine concern and compassion for the Dordt community and for Sioux Center,” she says. “I appreciate the authenticity of the group members, as they don’t deny their own mistakes or shy away from issues in Sioux Center.”

In March and April, academic departments will host Zoom calls with alumni of color, offering them a space to share their experiences at Dordt and what might be improved—to speak the truth in love.

“Where have we fallen short when it comes to what and how we teach issues of race, culture, and diversity? How can we be better?” asks Schaap. “We need to hear their stories and their input, and let it reshape our classrooms. This is something we should always be doing as faculty, but it’s hard to step out of ourselves and hear a different perspective.”

Also, faculty participating in the “Rewiring for Diversity” project will engage in interdisciplinary meetings held this summer to discuss and consider new pedagogical practices.

Why is it important to have discussions on difficult topics like race and social justice? Because Christian discipleship demands it, says Schaap.
“I was not taught the history of racism at all adequately, right through my undergraduate education. The killing of George Floyd made clear to me again that we don’t really understand the racial dynamics of our country. We want to pretend it’s something we’ve dealt with, but evidence says otherwise.”

Schaap sees racial justice as a clear way to work for Christ-centered renewal.

“I think that we have pretended that racial justice is an optional part of Christ-centered renewal for too long. These books challenge us to not underestimate our own racism; they won’t let us think that if we can just get through our day not thinking about race then we’re not racist. Tisby points to a new awareness as the first step toward ‘courageous Christianity’ when it comes to race—but then that must be followed by relationships and commitment.”