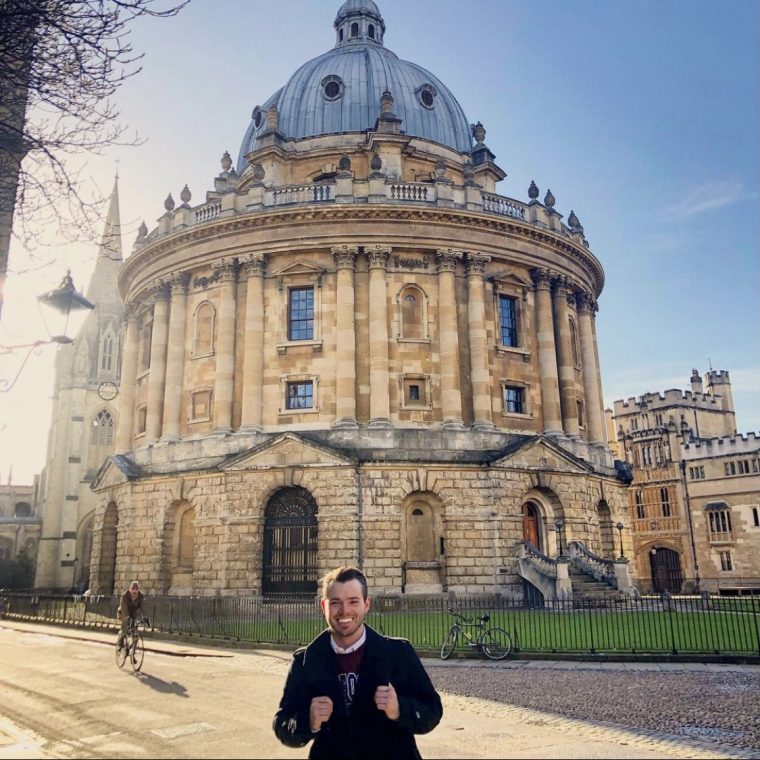 What’s it like to study abroad during a pandemic? Daniel Moe and Yage Wang found that it’s not easy, but it can be worth the challenge. Moe and Wang were the only Dordt students to study outside of the United States this year.

In December when Moe arrived at a connecting flight in Atlanta en route to London, his phone lit up with news that Prime Minister Boris Johnson had just announced that, due to a new Covid-19 variant, another national lockdown would take effect immediately in England.

“I quite literally boarded my flight to London, not knowing what I would encounter when I landed or if I would even be allowed to stay in the United Kingdom,” he says. “My apprehension was alleviated by the fact that I was already in transit—I certainly was not turning around—and nothing had changed from the previous weeks and months of continually recognizing that my best-laid plans are extraordinarily fragile, and the future is solely in God’s hands.”

When he arrived at Heathrow International Airport, Moe learned he would be able to stay. He and 20 other Scholars’ Semester in Oxford students immediately went into quarantine for 10 days; all their meals were delivered, and they could only interact with one another in the garden. After they received negative Covid-19 tests, they were split into three “bubbles”; Moe doesn’t have to wear a mask or social distance in his bubble, but he does need to wear a mask and practice social distancing when he interacts with others from different bubbles. Most businesses in Oxford are closed, and people are only supposed to be out for academics, exercise, or essential activities like grocery shopping.

“In many respects, Oxford is uniquely capable of teaching through a pandemic because the tutorial system consists of weekly one-on-one meetings with a tutor. Most of the rest of one’s time is spent independently reading, researching, and writing in preparation for the next meeting,” says Moe. “Even though meetings with tutors are now virtual instead of in-person, most of the program’s academic components are unchanged.”

The libraries are still open, which is where Moe spends most of his time. Moe says he gets a sense of accomplishment from synthesizing 30-40 hours of research into an essay at the end of each week. He enjoys “tracing the footsteps of all the prominent scientists, theologians, and politicians who have walked these same streets and sat at the same desks before me.”

Wang studied in South Korea during the fall semester. She’d originally signed up for the program in 2019, long before the pandemic began. While in South Korea, she took courses in journalism, Korean history, intercultural studies, and child welfare. She and her fellow students participated in outdoor activities like mountain biking and visiting historical landmarks, but she found it hard to get involved in the community because of social distancing.

“Many businesses only did delivery, but social distancing and other restrictions varied during the semester. At school, we were only allowed to dine in the cafeteria with screens between students,” she says.
Still, she appreciated the chance to visit South Korea and experience another culture.

“Studying in South Korea made me realize that it’s not always about how I feel or if I’m doing things wrong. It’s about listening to different voices, making silly mistakes, and building connections,” she says.