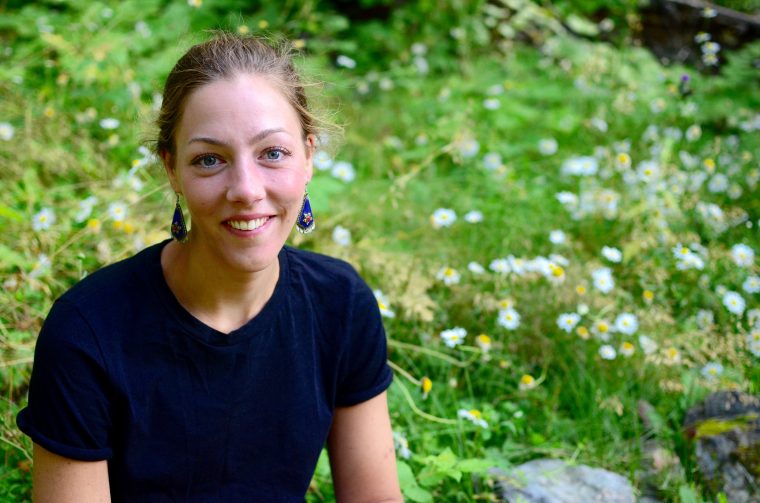 A year before she finished her Master of Fine Arts degree at the University of British Columbia (UBC), Sara de Waal (’14) looked at a task that seemed both gigantic and impossible: to finish her degree, she needed to write a book.

Eventually, she did just that, and successfully. One story from that book, “Cecilia and Richard,” recently won a prestigious national literary award, The Bridge Prize, presented by the School of Liberal Education at the University of Lethbridge for the best short story written by a student enrolled in a Canadian university writing program.

The story of “Cecilia and Richard”—and the story of the writer—is a joy.

There’s a rumor afloat that when you were a freshman at Dordt, you wrote a poem every day?

In my very first Dordt class, English Composition with Dr. Bill Elgersma (’81), we were required to list everything we’d written over the summer. I was ashamed to admit that all I’d penned were emails. Elgersma described one writer he knew who wrote 20 minutes every day. Something about the way he told this story made me feel like every single person in the world should do this. Feeling slightly chagrined for not having begun this essential human practice earlier, I bought three journals, committed to fill them by my next birthday, and started to write poems.

And you found that daily poem healthy?

Because I woke up every day knowing I’d have to write something, every day became a scavenger hunt for material to fill the evening page. In this way, my first poems did very little to improve my writing but did very much to improve my noticing.

Eventually, you were an art major, did lots with music, and did the usual student stuff, right?

All the poems and visual art taught me to see better and pay attention in new ways, so that by the time I started writing short stories in English Professor Luke Hawley’s class, I was so full of words and ideas, I couldn’t seem to stop.

So, no more poems, then?

I have more than 1,000 poems in 9 leatherbound journals, most of which I hope no one ever sees. I still use writing to practice seeing, but for several years now I’ve been writing poems to practice writing poems. Since September 2019, I have been writing daily three-line poems, a bit haiku-like in their attempts to condense language and juxtapose images. I like the daily challenge of trying to manipulate language in new ways within such tight constraints. As with all constraints, the daily haiku-ish poems have been delightfully freeing. Plus, I can read back over a whole year of my life in half an hour’s time! It’s like analog Twitter.

This secret should be known to everyone.

So next time instead of watching T.V.

And that little verse, I take it, is Sara as a child poet?

My first collection, hand-written in a floral notebook on the bookshelf alongside various poetry anthologies and collections. Good advice from my 9-year-old self to my 30-year-old self.

But that art and music thing of yours when you were at Dordt—you’ve not thrown in the towel on either of those, have you?

No, but that’s something I can have mixed feelings about. I often envy people who only make visual art or who only play piano, or who only write. Some of my greatest insecurities come from feeling like a life-long dabbler and a never-ever master. On bad days, I feel like there will never be enough time for fiction and for everything else. But that kind of thinking never gets me anywhere. It’s better to think that if a part of me is practicing drawing just to see better.

Seeing—that’s a big deal, isn’t it? One of my favorite lines belongs to the Depression-era photographer Dorothea Lange: “Photography teaches you how to see.”

I like to return to the way Robert Farrar Capon, the Episcopalian priest, writer, and cook, talks about the art of food: “The world may or may not need another cookbook, but it needs all the lovers—amateurs—it can get.” He says the role of the amateur is simple, “to look the world back to grace.”
If my role is “to look the world back to grace,” I can continue gladly on as an amateur in writing, visual art, and music with anticipation and love instead of insecurity. And isn’t it wonderful that there is not enough time? I’d rather be like a child still playing in the mud when the bell rings than one who is all played out, waiting at the door for the teacher.

Ah, teaching. I’m sure that by teaching little kids as you do, you get good at rolling your eyes!

You know, I can go days in a row talking almost exclusively to humans under the age of eight. Adults are supposed to teach kids how to talk, but I think I learn a lot from children—their brave forays into language, how they invent the words needed to communicate their own truths. Teaching, and talking with kids, being included in their nascent language that’s still so shameless and alive—that helps me write dialogue, too.

When you talk about your work and the things that matter to you, it seems that fiction is like a new kid on the block.

I wrote 10 short stories in my senior year at Dordt and the summer following. In my time in the UBC graduate program, I took three fiction workshops. I wrote four short stories for these classes. It wasn’t until my final year of my master’s degree, when I lived off the grid and basically dedicated a whole year to fiction, that I felt free to experiment and play and test out everything I’d learned about fiction up to that point. In one month, I wrote 20 first drafts of 20 new stories and then spent the next seven months revising them and weaving them together into a book of 15 interconnected stories that became my thesis. “Cecilia and Richard” is one of the stories written during that year.

I did not consciously follow a prototype for this story, nor was I going off a memory or trying to consciously process an experience. In retrospect, though, I can see that I wrote the story in a year following much grief and loss, both my own, but also of people very close to me. I was nearer to loss than I’d ever been and nearer to language than I’d ever been, and the two felt incompatible. This story might have been an unconscious effort to try to bring them together, language and loss. That may well have been the emotional genesis of this work.

It is a beautiful story, so thin yet so rich. Less is more in “Cecilia and Richard,” less is much, much more. What’s more for the writer? What’s to come?

Writing for me remains a constant curiosity—what can words do? I write to find out. I wrote this story to find out what words can do between a father and a daughter after the mother dies. I wrote to sit with them long enough to see which words, if any, might make a difference.

Is there a main idea or feeling that I wanted the reader to take away from the story? I don’t think that there is because this story is not about the coming away, it’s about the sitting in. If a story is a place to sit in for a while, within the temperamental, flawed, yet intimate shelter of language, then it is worth continuing to write.