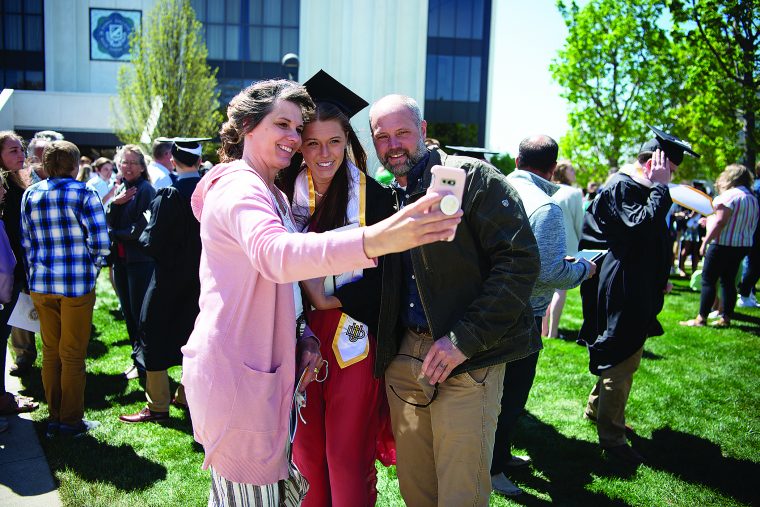 The 2021 commencement ceremony looked a little different from that of an average year. The commencement ceremony was in-person, but there were some alterations to allow for social distancing. All the graduates who chose to participate in the ceremony–298 of the 365 total graduates were present on Friday, May 7—sat in the B.J. Haan Auditorium. Only a small fraction of the 1,485 total guests were seated in the auditorium; most watched the ceremony via livestream from the Recreation Center and the De Witt Gymnasium. About 24 faculty and staff sat on stage during the commencement ceremony, while others gathered elsewhere on campus.

Still, graduates like Lydia Smits didn’t take for granted the fact that they could be part of an in-person commencement ceremony.

“It provides us all with a sense of closure and celebration for what we have all accomplished,” says Smits. “Knowing we were able to walk across the stage of the B.J. Haan Auditorium and join the alumni who have gone before us, brings a sense of accomplishment and is a true honor.”

Months earlier, the commencement planning committee had decided that their goal was to host a ceremony that was as close to normal as conditions allowed, says Jim Bos, registrar.

“What we learned from our virtual commencement in 2020 was that students had a strong desire to get together one last time as a class—to be with their friends and to recognize their achievements together,” says Bos.
This was true for Alan Park. Even though his parents weren’t able to make the on-campus ceremony, Park was grateful he could end his college career with his friends.

“Assuming that commencement will be the last time I will see all my friends, classmates, and professors at Dordt, I was excited to celebrate alongside them before we went our separate ways,” he says.

Following the ceremony, things looked a bit more like normal. As they stepped out of the B.J. Haan Auditorium and onto the Campus Green, graduates were greeted by smiling friends and family as well as warm sunshine.

“If we’d known that the weather would be as nice as it was, we would have considered holding the ceremony outside!” laughs Bos. “In the past I’ve seen snow, rain, tornados, and more on commencement day, so it was safer to plan for an indoor ceremony than for an outdoor one.”

Looking back at her time at Dordt—all the projects and exams she worked on, the deep-rooted friendships she gained, and the opportunities to grow in her faith—Jacquelyn Geels says that the commencement ceremony was an excellent way to conclude her four years of college.

“It makes moving on into the next phase of life feel more real,” says Geels. “It will be a definite point that I will be able to look back on and remember for many years.”

“It was a chance to gather and to celebrate,” says Bos, “And to do that in a worshipful way, recognizing the achievements of the students but understanding that the reason we do this is Soli Deo Gloria—to God alone be the glory.”