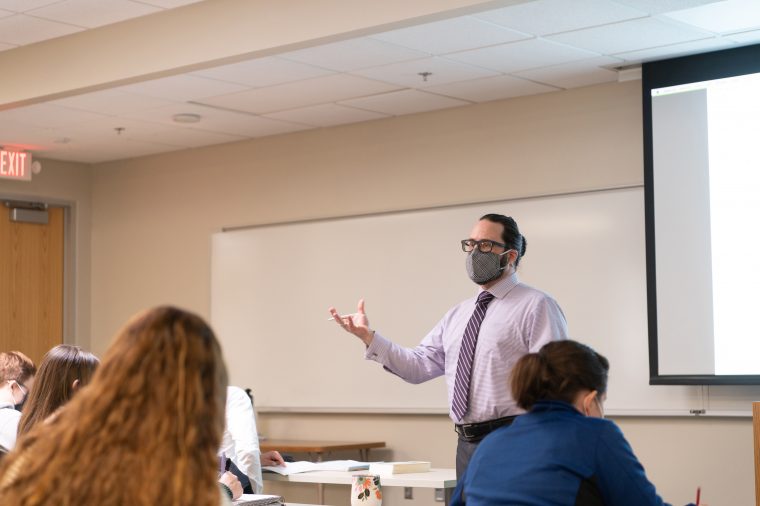 Every other year, Dr. Walker Cosgrove teaches History of the Muslim World. And each time, the class fills up quickly with students studying in a variety of majors—political science, engineering, history, computer science, education, and more.

Many students take the class to fulfill a cross-cultural requirement, but the course is popular for another reason, too: learning about the history of the Muslim world is a relevant topic, particularly since the Middle East is often in the news. Islam is the second largest world religion—second only to Christianity globally.

That’s part of the reason why Lane Kieser decided to take the course. Growing up, Kieser heard stories about terrorist attacks in the Middle East. When he learned that Dordt offered a class about Muslim history, he jumped at the opportunity to take it—he knew that terrorism wasn’t the entire story, and he wanted to find out more about the nuances of Muslim community.

“This class has educated me in Islamic culture, religion, and history, and I am a better person for it because I understand how to interact with and love these people better,” he says.

Students engaged a series of books in the class, including one on the history of the world from an Islamic perspective and one that focuses on topics such as Mohammed, women in Islam, jihad, Sunni and Shiite, and more. They also read Persepolis, a graphic novel that tells the story of a girl growing up during the Islamic Revolution in Iran. Throughout the course, Cosgrove tries to help students think beyond stereotypes they might find in the media.

“I would like students to come away from the class with a posture of charity, humility, and understanding as they engage Muslims and individuals from the Middle East. It’s likely that they will have neighbors or coworkers who are Muslim, and I want students to recognize that these are people with hopes and dreams. They fall in love, they start businesses, they write poetry. Everything we experience, they experience as well.”

“It’s good for Christians to be aware of what other people think and believe,” says Cosgrove. “I think there’s a lot of misconception about Islam, mostly because our media deals with it on a superficial level and loves conflict and to sensationalize.”

Lexi Schnaser says that this was her favorite course this spring.

“It really challenges me, and I think it challenges a lot of my peers as well. It’s cool to take a class where I can really tell that I’m going to come out of it with more knowledge on a topic than I did before taking the class,” she says. “I think learning about other religions and cultures is essential to a healthy Christian faith and Reformed perspective.”
Annetta de Jong has also appreciated taking History of the Muslim World.