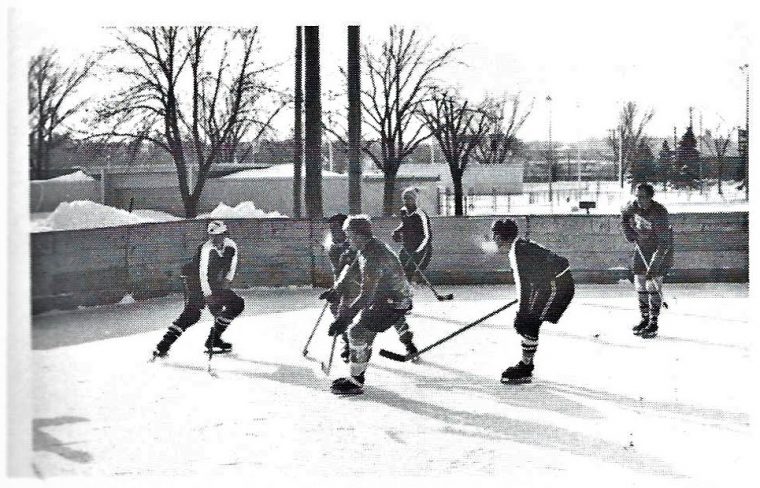 If you follow hockey at Dordt and wonder how it began, you might start with the consistory of an Edmonton, Alberta, church.

The preacher, Reverend John Piersma, was a big-time hockey fan who found a way to speed skate through consistory meetings so he and those elders similarly inclined could sprint over to the arena and catch the third period of the Edmonton Flyers game—free admission after the first two periods.

Jan Van Niejenhuis was one of those elders. He had immigrated from the Netherlands only a few years earlier and, back then, knew next to nothing about ice hockey. Still, he was so taken by the game that when a neighbor down the block sold his black-and-white console TV, Van Niejenhuis bought it, then set it down in the living room so the whole family could watch the National Hockey League (NHL) on Saturday nights.

Anje and Jan Van Niejenhuis’s three sons, Bert (’68), Herm (’71), and Cecil (’77), started slapping pucks around on Christian school ice when they were kids. They got themselves hooked but good on the national sport of Canada.
In time, all three boys came to Dordt. Moving from Edmonton to Sioux Center is quite a trek.

Fifty years ago, loads of Dordt students lived off-campus. When Herm, the second son, finally got his Dordt application in, the dorm was full, so he had to live a block east of downtown Sioux Center, where he shared an upstairs apartment in a house owned and occupied (downstairs) by a lovely grandmotherly homeowner named Mrs. Gerrit Pluim.
It’s possible to say that match was made in heaven; young Herm could speak Mrs. Pluim’s native Dutch, so they got along royally. When, later, a room in the dorm opened, he wasn’t particularly interested.

“I wandered over to the dorm to visit, and it just seemed to me four people in such close quarters made it a crowd,” he says. So he stayed put downtown with Mrs. Pluim, who laid out sweet rolls on mornings when he and his roommates were a bit late for class.

Soon enough, he had a girlfriend named Deadra “Dee” Plowman (’71), who suggested he needed a haircut and sweetly volunteered to do the job herself. He told her to come over, and she did, ascending the stairs. Such proximity would have been verboten in dorm life. They’ve been married now for 50 years.

That first year of college, Herm had taken his skates along to Iowa because brother Bert had said there was a rink in Central Park; but he got those skates out only once, for an ice-skating social at the Sioux City Auditorium. Whoever sponsored the skate promised a few minutes to whoever wanted to take along a stick and puck. That was the only time his skates came out of safekeeping during his entire freshman year. But that night he’d begun to see that he wasn’t the only Dordt kid who loved hockey.

The next year, the college—which was little more than a decade old—welcomed one of the biggest classes ever. Included in the new crowd were more than a half-dozen guys who loved hockey and played as if they did, even an honest-to-goodness goalie named Keith Vanderzwan (’73), who remembers having to drive all the way to Winnipeg, Manitoba, to buy goalie gear. To Canadian hockey players, Northwest Iowa was the last frontier.

Soon, a roughshod league was formed from club teams at Drake University, Iowa State University, and Graceland College, along with the brand new “Sioux Center Blades.” The Dordt administration wasn’t sure what to do with a bunch of yahoos who played for fun, smoked a bit, and were known to tap a pitcher or two at Shakey’s after the game.
Dordt had a team and a name. They had a schedule too; all they needed was a rink. So, they built one—why not?—out at Tower Park, in what was back then the southwest edge of town.

Ever since, hockey has been a first-rate attraction at Dordt, even before the sport became popular in the United States. Why? Well, some like to think that, with every game played, a few conventionally sweet Sioux Center pieties got knocked silly by all that bodychecking.

“People like to think,” Herm says, “that hockey exists somewhere out there on the very edge of total depravity.”
It always was rough. Even Herm, Vanderzwan will tell you, found it difficult not to take some shots. “Herm was a great skater and thus, a good hockey player, a smart player, not dirty, but willing to mix it up for control of the puck,” he says.

Still, to a ton of American innocents, all that banging going down on and off the boards didn’t feel much at all like turn-the-other-cheek righteousness. Some holy eyebrows were furrowed every time those Canadian boys came out to circle the ice.

Some 30 years later, Herm Van Niejenhuis, as strong a skater as anyone in the olden days, had become Pastor Herm Van Niejenhuis. In the later years of his ministry, he and Dee returned to Sioux Center when Herm accepted the call to Covenant Christian Reformed Church.

People at Dordt hadn’t forgotten that, hockey-wise, Pastor Herm was there way back in the beginning. So, with one of the finest skaters and players the college had back in town, the administration, who had taken ownership of hockey, came knocking: the Dordt Blades needed a coach.

“I told them I’d never coached hockey, but they said that was okay,” says Herm. In the old days, neither had Professor Case Boot, who’d stood behind the bench for years and never done much more than lead in prayer before games.
Herm says it sounded to him like a sweet offer. He couldn’t help but enjoy hanging around a rink again, even being able to get out on the ice himself in an arena right across the street from Dordt, a place that had been built, at least in part, for community hockey.

He says he didn’t really “coach” the Blades. He’d encourage kids, and he loved just being with them, felt a bit of the old enthusiasm every time Dordt’s first line hit the ice before the first buzzer.

Thirty years after the Blades played home games at the Sioux City Auditorium, the team was now not only acknowledged but even supported by the college. But what he discovered quickly was that players had changed. They weren’t just a bunch of kids slapping a puck around on ice laid out on the Christian school playgrounds or frosted streets in front of the house. Today, he says, they come out of community or school hockey teams, echelons of supervised leagues, years of learning and playing. Today, it’s a whole different operation, more business-like, less spontaneous.

“My mom and dad never saw me play hockey,” he says, matter-of-factly. “Hockey was a kids’ thing, camaraderie with my friends. My parents would be out of place beside a hockey rink. When we played hockey, we did it on our own.” Back then, it was pure kid stuff.

Still, coaching, at least what he was able to do of it, was a great experience, he says. When he was nudging up close to his sixties, he enjoyed hanging out with the teams, maybe especially on long trips into Canada, which the team often took during Christmas breaks, public relations trips that were a venue for recruiting students.

Before one of those trips, the campus pastor once told him he’d heard someone in authority say that all those guys required someone’s supervision. “Herm’s watching out for them,” someone else said, but then the guy said, “But, who’s going to watch out for Herm?”

Even Pastor Herm likes that kind of role. “I’m a bit of a rebel,” he says, “always was, still am.”

All these years later, he’ll admit feeling a bit more stressed by hockey’s almost inevitable rough housing. After all, he was the coach, not to mention a preacher in a local church. He had responsibility for the players, whether he liked it or not. His years wielding a stick were behind him, but he had to look after the Blades.

One Saturday at Casey’s Bakery, he says he was waiting for cheap donuts when he felt someone tugging on his sleeve. He turned to look. It was a woman he didn’t recognize.

When she eyed him closely, he didn’t show it, he says, but he winced. He didn’t know her. He believed he was about to take a hit.

“We just love hockey at Dordt,” she told him. Big smile. Then she sidled a bit closer. “We especially like the fights.”
He didn’t get her name.

The Van Niejenhuises had a blessedly successful ministry in Sioux Center all those years later, even got himself a little time on the ice. Today, filling pulpits hither and yon (including a Florida stint in January), he and Dee live on a quiet street in Willmar, Minnesota, where Dee has lots of family.

When Pastor Herm and Dee Van Niejenhuis retired from Covenant, goodbye wishes from church families were recorded on video. When Andy (’98) and Rachel (Bakker, ’97) Landman lined up, there were only four of their five kids on the lawn posing. Hannah, the oldest, was missing. Rachel said Hannah, who was in middle school at the time, refused to say goodbye to a pastor she didn’t want to leave.

This fall, Hannah Landman will be a sophomore at Dordt.