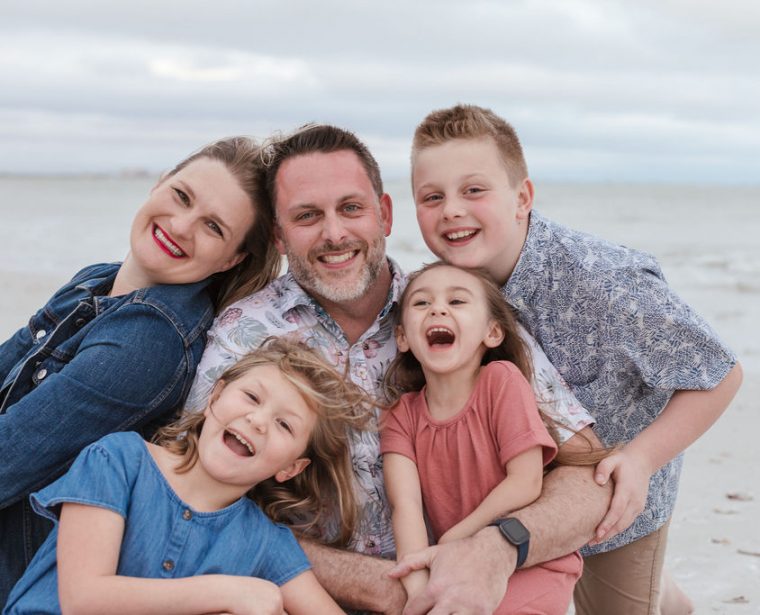 “My Dordt education shaped my thinking about my calling to ensure that all children are loved, supported, and have the opportunity to learn,” says Liz (Friesema, ’05) Hoek.

“At the time, I thought I was only preparing for my vocation, but God was shaping my heart to work for Christ-centered renewal in my home as well.”

Now, years later, Hoek sees how God prepared her to welcome two beautiful children into her home through adoption, inspired by both her husband and her background as an educator.

“Kiel, my husband, was adopted as an infant, so adoption has always held a special place in his heart,” she says. “We knew we wanted to grow our family through adoption at some point, but we waited on the Lord to make it clear when the time was right.”

Eventually after a conversation Kiel had with a coworker, the Hoeks realized that the time was right. They began the process of becoming foster parents, hoping that one day they might be able to adopt.

“We knew from our work as educators that children thrive in safe, consistent, supportive environments and that their greatest need is to experience the love of Jesus. We felt called to provide those things,” says Hoek.

Becoming foster parents was an involved process. They spent hours attending classes and trainings and participating in meetings. They also had to undergo a series of inspections, where their home, finances, and marriage were examined.
Once they had been accepted as foster parents, they waited for a child to arrive. A placement was closer than they expected.

“Lily, our older daughter, was in my son’s kindergarten class, so they had been friends for most of the school year,” says Hoek. “She and her younger sister, Kylee, were being fostered by another family at our school.”

That foster family had initially accepted Lily and Kylee’s placement in their home because they thought it was temporary.

“They were unable to consider adoption at that time, so the other foster family approached us, and we approached our team of case workers,” says Hoek.

Since the Hoeks had been seeking a foster-to-adoption placement, it was a perfect fit.

“Lily and Kylee felt like family from day one,” recalls Hoek. “We agreed to move forward with the adoption process before they were ever placed in our home.”

“Working as a classroom teacher gave me plenty of practice in loving others’ children as my own, setting up environments to help them succeed and thrive, and adjusting when what I thought would work wasn’t successful,” she says.

The Hoeks saw how God can restore families.

“While the adoption process was going through the court system Kylee’s biological father, who was previously unidentified, was named,” says Hoek. Kylee started visits with him, and within a year he was given custody of her.
The Hoek family built a strong relationship with Kylee’s biological father, and he values that they are an important part of Kylee’s life. So, even though the Hoeks did not adopt Kylee, she spends at least two days a week with them.

After 1,141 days in the foster care system, Lily was officially adopted by the Hoek family. She is almost nine years old, and Hoek describes Lily as the bravest girl she knows.

“She’s always up to try something new. She is funny, determined, and kind. She loves art, crafting, soccer, and horseback riding,” says Hoek.

Kylee, who is almost five, loves to be the center of attention and is decisive.

“She makes up songs and dances all day, and she can usually be found in a dress-up princess dress with all the accessories,” adds Hoek.

The Hoeks acknowledge that foster care and adoption can be emotionally and mentally challenging. Still, they recognize God’s grace amid the challenges and the growth they have experienced. And the rewards are closely tied to the challenges.

“Our kids have grown so much in how they relate to each other, to us, and to their peers. Our marriage is stronger than it has ever been, because when life gets hard we have been able to lean into each other, and lean together into our faith,” says Hoek.

As adoptive parents, the Hoeks have also had to learn how they will share and explain adoption to Lily.

“When we talk with Lily about her adoption, we tell her how much she is loved—loved by our family and loved by her biological mom. While her mom was not able to provide a safe place for her to grow up, we know that love is deep both ways,” says Hoek. “We tell her that we are so grateful for the blessing she is to our family, and how much love she has brought to us, but we also acknowledge that adoption for her involves loss and grief.”

You do not need to be superhuman or specially called to be a foster parent, she adds. You just need to be willing to show the love of Jesus.

“We are ordinary people who have taken the next steps through doors that God has opened, and he has blessed us beyond what we could have imagined.”