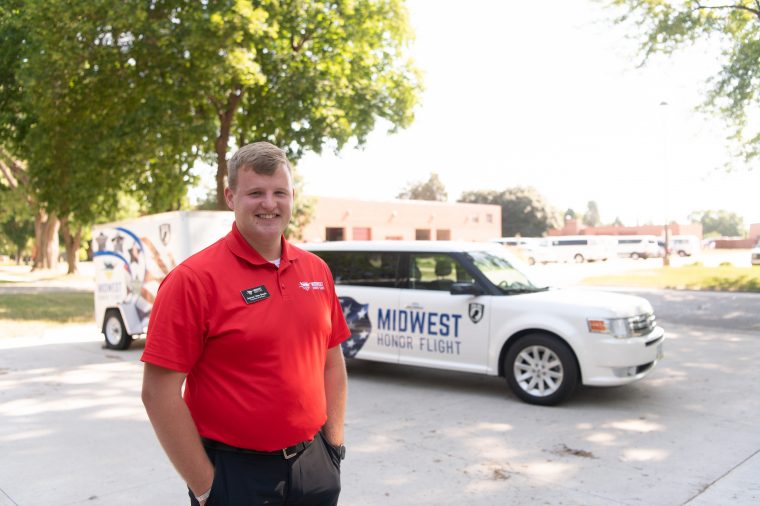 Aaron Van Beek (’18) has always appreciated those who serve in the military. As a child, he spent every Memorial Day either riding a decorated bicycle or marching with the Boy Scouts in the local parade. Military service also runs in his family: three great-grandfathers served in World War II, one grandfather was a Vietnam war veteran, and a sister is in Army National Guard basic training.

“Growing up with family members who serve, I have a strong appreciation for the freedoms that we have in the United States, because of those who were willing to serve and pay the ultimate sacrifice,” says Van Beek.

Van Beek, who studied elementary education at Dordt University, wanted to find a way to give back to those who served in the military. He had heard of the Honor Flight Network, an organization that transports America’s veterans to Washington, D.C., but he didn’t give it much thought until his junior year of college during Christmas break.

“All I wanted was to volunteer on an honor flight,” he says. “I started doing research and quickly realized that there hadn’t been an honor flight in Northwest Iowa since 2012, and that the closest one was three hours away.”

He started communicating with the Honor Flight Network about bringing an honor flight to his area to provide World War II, Korean War, and Vietnam War veterans of Northwest Iowa, Southwest Minnesota, and South Dakota a way to see the war memorials in Washington, D.C.

His original plan was to simply charter one flight; instead, he volunteered to be president of the Midwest Honor Flight, a 100 percent non-profit organization.

“I remember calling the Network and saying, ‘I’m only 20 years old. Is it okay if I host an honor flight?’ And they said, ‘Yeah, you’re the youngest we’ve ever had, but sure, let’s get you going,’” says Van Beek.

Since 2017, the Midwest Honor Flight has flown six flights, or “missions,” and has had more than 525 veterans participate.

“We have a waiting list of 800 veterans who are waiting to go, and we will have two missions this fall,” Van Beek says. “The missions are a small token of our appreciation as the American people. It will truly never make up for the hours, days, and years that our soldiers gave up with their friends and family, in service to their country. But at least it’s a start.”

Each mission is a one-day charter flight that is free of charge for veterans. Van Beek, the veterans, and volunteers spend 10 hours in Washington, D.C., where they watch the changing of the guard at Arlington National Cemetery, visit all the war memorials, and take a bus tour of downtown Washington, D.C. They fly back to the Sioux Falls airport that evening.

“It’s a whirlwind of a day, but it’s a day of honor,” says Van Beek. “Our veterans are thanked throughout the day, and they come back feeling appreciated. For some, they’re thanked and welcomed home for the very first time, and it feels as if their war is finally over.”

Van Beek says veterans have told him that the Midwest Honor Flight is cathartic as they process their wartime experiences.

“There are veterans who don’t want to talk about their story; it used to be called shell shock, but today we call it PTSD. These are real repercussions that our veterans struggle with, and our goal with the Midwest Honor Flight is to try to bring healing and closure. When they see the memorials, they can see that their service matters, that their service isn’t forgotten. Generations to come will be able to visit the memorial and see what they did for their country,” he says.

A large part of his role as president includes lining up fundraisers, speaking with donors, and presenting to groups. Every year, Midwest Honor Flight holds motorcycle and classic car rides, a pancake feed, and a 1940s inspired hangar dance to raise funds. Culver’s restaurants in Northwest Iowa, Southwest Minnesota, and South Dakota take one day a year where they give 10 percent of sales to Midwest Honor Flight. And in 2021, the Sioux City Musketeers hockey team raised $54,000 for the Midwest Honor Flight by selling hockey sweaters after their game.

Van Beek, a third-grade teacher at Kinsey Elementary School in Sioux Center, Iowa, loves being a teacher as much as he loves serving as volunteer president of the Midwest Honor, and he especially enjoys it when his work with the Midwest Honor Flight aligns with his role as an educator.

“When I teach a unit on service in social studies, we talk about how we can serve the community better. One activity I have my students do is make cards for the veterans who will participate in the Midwest Honor Flight. Students will write things like, “Thank you for serving our country—I love living in America,” or “I’m nine years old and in the third grade, and my teacher Mr. Van Beek gets to take you on an honor flight,” he says.

He talks with his students about the freedoms that America has – free public-school education, a summer break, and so much more.

“Obviously, our freedoms are numerous, and we have plenty to be thankful for, so it is a good opportunity for students to understand what we have and why we have it, and I can tie that to the work I do with the honor flight.”

Anybody can be a change maker, says Van Beek. There are many ways that people can better their communities, their country, and their world; every little bit helps.

“Service is a big part of faith, whether that’s doing missionary work in developing countries or in a local community,” he says. “I have a passion for veterans and for service, and this is one way for me to show that, as a grateful American and as a Christian, I am thankful for those who have paved the way for the freedoms we have today.”