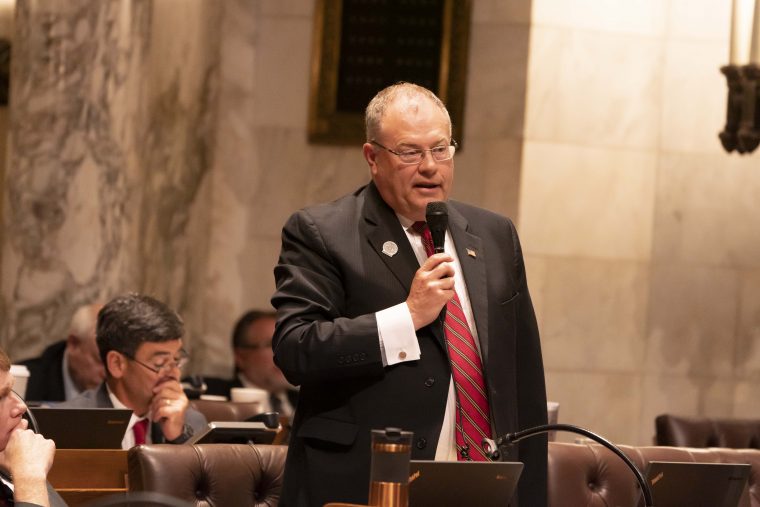 “In March of 2014, my State Representative called me to let me know that he wasn’t going to run again.  I immediately announced that I was running for his seat in the Wisconsin State Assembly,” says LeMahieu. “About a month later, my state senator announced that he was running for Congress. The Senate Majority Leader called me up to ask me to run for Senate instead of the Assembly. After a week of weighing the pros and cons, I decided to run for the Senate.”

Katsma had had a satisfying and fulfilling 34-year career in community banking and, at age 56, with kids out of the house and most financial commitments behind him, he was looking for something different. “I was interested in participating in public policy at the state level. There were some conservative movements going on in Wisconsin, starting in 2010, and I wanted to participate in them first-hand,” he says.

LeMahieu was the owner and publisher of The Lakeshore Weekly, a community shopper that serves the Village of Oostburg and surrounding areas. He had gained some experience in local politics before he ran for a seat in the Senate, serving on the Human Resources and Finance Committees of the Sheboygan County Board from 2006 to 2015.

“I knew Terry pretty well prior to becoming a senator,” LeMahieu says. “We live two blocks from each other. We were both members of the Oostburg Kiwanis Club. Oostburg isn’t that big! When I heard that Terry was considering running for the Assembly, I was pretty surprised but very excited. It has been great working with Terry over the last seven years.” LeMahieu serves as a senator in district 9 and Katsma as a representative of district 26.

Elected to the state legislature the same year, the two men have had many common experiences. “Senator LeMahieu and I have collaborated on numerous initiatives,” says Katsma. “I am proud to call him my senator.”

In November 2020, LeMahieu was also elected Wisconsin Senate Majority Leader. “It was an honor to be chosen to lead the Senate,” says LeMahieu. “It is exciting and sometimes terrifying knowing that I am ultimately responsible for leading the Wisconsin state senate.”

Katsma, currently in his fourth two-year term as an assembly member, feels honored to serve on the Joint Finance Committee, the legislative committee that develops and approves the bi-annual state budget. “On this committee, I am able to have a direct impact on state policy with regard to spending and taxation,” he says. His training in business administration at Dordt and his years as a banker have given him the tools needed to serve on the committee. “Political science was always an interest of mine, but I consider myself more of a businessperson and a banker than a politician.  Many of my colleagues also had a career before politics, so we bring our experience and knowledge of different sectors to our work in politics.”

Katsma, the first person from his family to attend college, chose Dordt because of the good reputation of its business administration program. “I am so thankful and grateful for the impact of Dordt College at a formative time in my life. I have fond memories of my time in Dr. John Visser’s finance classes and Professor Henry De Groot’s accounting classes.”

In addition to preparing him to be a banker and a member of the Wisconsin state Finance Committee, Katsma feels that Dordt shaped his worldview. “My time at Dordt prepared me well to be a Christian politician, Christian banker, husband, father, grandfather, and elder,” says Katsma. “The political sphere, as every sphere of God’s creation, needs Christians to be of influence. My faith affects everything I do, and when it comes to the political sphere, it impacts the principles I follow.”

LeMahieu also appreciates his training at Dordt and has found it to be useful in his current role. “I really enjoyed the political science courses and the discussions led by Professor King,” he says.  And the business courses he took have helped him understand the economics and tax policy he needs to craft budgets and make broad policy decisions.

“As I learned at Dordt, all decisions should have the redemptive work of Christ at their foundation,” LeMahieu says. “I think being a Christian in politics is no different from any other vocation or career. “Whether crafting legislation, speaking at an association meeting, running a business, or shopping for groceries, it should all be done through the lens of Christian service. The main difference is that I am in the public spotlight.”