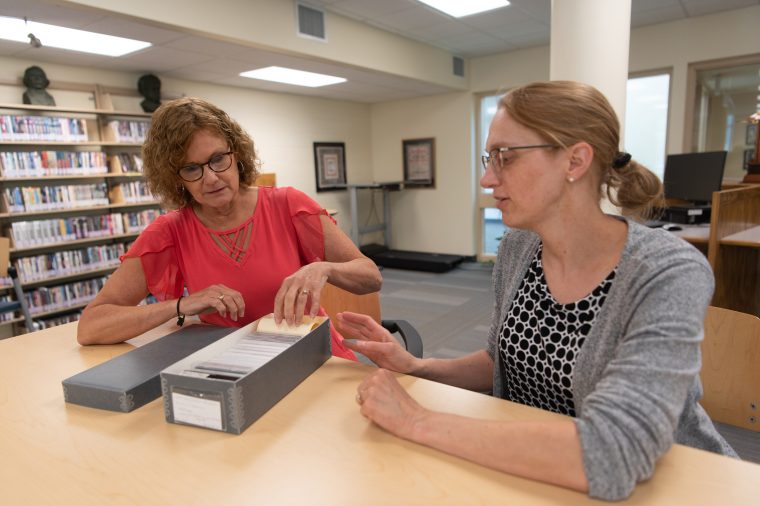 A few years ago, Archives Coordinator Ingrid Mulder opened a drawer and found two boxes of deteriorating cassette tapes. Upon further examination, she realized that 11 of the cassettes were interviews of B.J. Haan, Dordt’s first president, narrating his recollections of Dordt’s early years. Knowing that these tapes were a special part of Dordt’s history, Mulder brought them to Hulst Library Director Jenni Breems.

“B.J. Haan was an influential leader who cast a vision for Dordt,” says Breems. “He was also known for how he interacted with the mayor of Sioux Center, Maurice TePaske, and how they worked together to build the community of Sioux Center.”

Mulder and Breems set out to preserve the fragile cassettes and to make the voice of B.J. Haan available to a wider audience by digitizing and curating the content. After receiving grant funding from the Sioux Center Community Foundation’s Generations Grant, they worked with George Blood LP, a leading provider of archival audio preservation, to digitize the cassettes.

But it wasn’t as simple a process as sending the tapes off to be digitized. Mulder spent hours listening to the cassette tapes to determine which were best to have transposed and what stories should be digitized. She kept track of the metadata to determine who was mentioned in each clip, what was discussed, when the interview took place, where they were located, and why the recording was created in the first place.

“It wouldn’t be good enough to just have a recording; you need to know what’s on it, who’s speaking, who did the interview, and what other people were referred to in the recording,” says Mulder.

“Every time I walked to the archives, I could hear B.J. Haan’s voice floating through the hallway,” adds Breems. “Ingrid listened to the cassettes multiple times and took diligent notes.”

Once they received the digitized recordings and the original cassettes, Breems and Mulder set out to create an oral history collection in Digital Collections @ Dordt, which is Dordt’s institutional repository. There are 24 individual recordings of Haan. Listeners can tune in to hear Haan read the Founders’ Vision, reminisce about breaking ground on the original classroom building, comment on the hiring of Dordt’s first faculty members, recall the fact that Dordt was built on what was a mink farm, explain the importance of promoting Christian education locally, and much more.

“This was a labor of love in many ways,” says Mulder. “I was awed by the fact that, here is a group of people—B.J. Haan and others who founded Dordt—who started something from nothing. And they started it on the heels of another failed Christian college, Grundy College, so people were saying, ‘It’s not going to work, it’s not going to work.’ They had a vision, and they had faith and trust. They were willing to work together, even if they didn’t always agree.”

Since launching the oral history of Haan in the spring, the recordings have been played more than 500 times—highlighting that Dordt supporters are eager to hear what Haan had to say.

“People are listening,” says Breems, “and there are many fascinating stories that give insight into Dordt’s history, the person that B.J. Haan was, and the vision that he cast.”