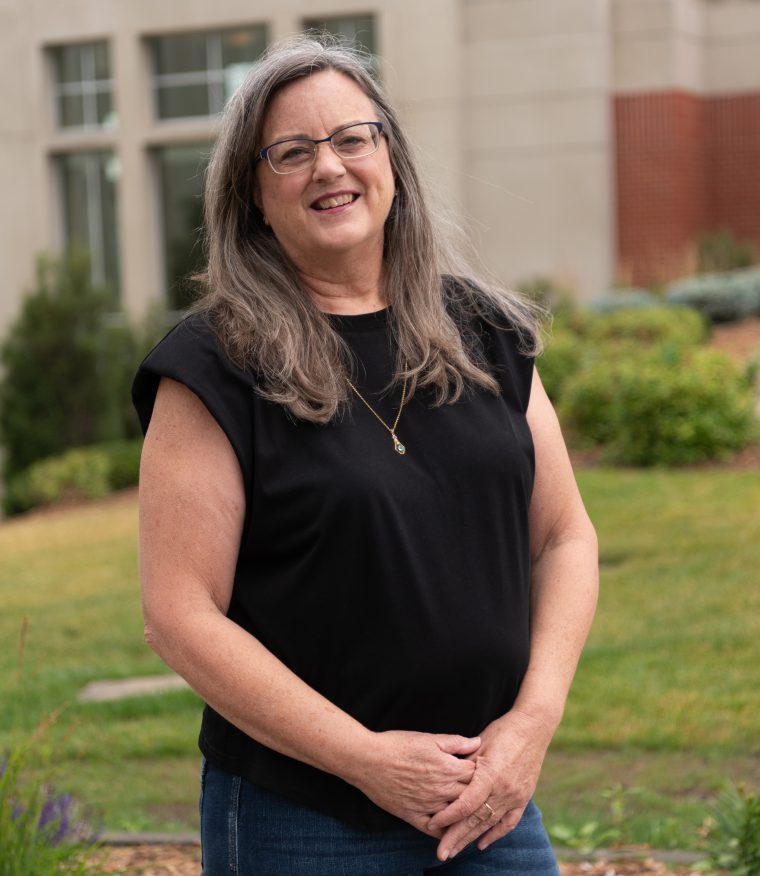 Jane Wolterstorff (’82) has worked and learned in the social work profession since she graduated from Dordt. That summer, just as she had previous years, she headed to Michigan to work at a youth camp. She’s been working in her major field ever since she marched down the center aisle of the B.J. Haan Auditorium in 1982.

Jane doesn’t remember making a conscious decision to major in social work. What she came to understand in a high school sociology class was that she cared a lot, even loved thinking about—and studying—people.

“At that minute,” she says, “I knew that’s what I wanted to do.” So, when she packed her bags for Dordt, she had an idea of her academic plans, even though she didn’t know how exactly things might go.

Wolterstorff’s interest in sociology found a fitting home in a brand-new degree program at Dordt.  The college had recently recruited Social Worker Ken Venhuizen, who was working in Korea at the time, to teach courses and create a program that would lead to a social work degree. Four years later, she was one of 10 of the institution’s first social work graduates.

After graduation, knowing her career would last a lifetime, her dad told her, “Just go back to camp Have a great time.” She had worked at Michigan’s Camp Roger for several summers during her college years and loved it.

“You know, I spent time outdoors all day long—I was waterfront director, taught swimming lessons at Dordt, was a lifeguard all through high school,” she recalls. Camping for one more summer was almost a dream.

Meanwhile, she looked around Western Michigan, put in one application at a place called St. John’s Home, and, just like that, come fall, had a job.

St. John’s Home was a residential treatment center, and Wolterstorff lived with girls who were either removed from their homes or had some delinquency on their records—a tough bunch of clients for a recent college grad. Her shift was in the afternoons, which meant hanging out after classes with as many as a dozen girls, who would be doing homework, eating dinner, watching TV.

She loved it. “I liked people. Social work, I thought, is going to be about people—and I liked people,” she says.

The mission at St. John’s was to get kids back into their own homes. “I learned a lot there because, after every shift, we’d sit down and describe what we did and how it went—and we’d evaluate our own behavior,” she says. “Some of it was correction too, for us, I mean; but it was great training every night.”

Those moments were a valuable part of her education, she says. But then, Jane Wolterstorff would say that life is all about learning. A diploma never meant education was completed.

Two years later, Jane and a colleague at St. John’s began teaching lifeguarding to other staff members because taking kids canoeing or swimming required a registered lifeguard to be present. Staff from other area agencies who wanted and needed lifeguarding joined in, including staff from a place called Wedgwood Acres, an agency that dealt primarily with kids who didn’t require lock-up but could come and go.

Not long after, she moved to Wedgwood. She got poached and says “that kind of poaching goes on often. These days, I know someone almost everywhere in the city.”

Wedgwood needed a Jane W-type, and Wedgwood was an upfront faith-based institution, a place she thought she’d feel at home, faith-wise.

After six months there, two positions opened at Wedgwood boys’ homes. “I always loved the outdoors—backpacking, canoeing, swimming. So, ‘activity therapy’ looked really good to me.” An activity therapist is what she became—at two boys’ homes, almost like going back to camp.

Wolterstorff and her colleagues taught emotionally impaired kids, boys, the kinds of communication skills that would enable them to get along, kids who were often either abused or neglected as children. The mission was similar to St. John’s’ mission: help the kid heal to the extent that he or she could move out and back, not stay.

Outdoor activities did wonders for many kids. She’d create group tasks to teach trust and team building—like making rope swings or building12-foot walls. She and the kids had great fun out in the woods making things.

By the early 1990s, the “experiential education movement” had begun, she says. Wedgwood Acres sent her to Georgia for advanced training for the types of outdoor activities she was already doing. Research indicates, she says, that experiential education in the outdoors yields positive changes in emotionally impaired kids, changes in self-concept, social adjustment, academic achievement, and group cohesion. What’s more, it was fun—like camp.

Wedgwood soon began to offer its experiential outdoor education programs to other agencies. When a friend wanted to bring her group of sexual abuse survivors into the program to see how they might profit from outdoor experience, Wolterstorff was more than ready. What she discovered was that the abused suffer a physical wound that can be significantly helped by physical programs like ropes courses.

Stretch two cables between two trees, for instance. Ask the kids to each step on one cable, then grab each other’s hands for balance as they slowly move down the cable. Sexual abuse, Jane says, destroys trust. Two cables across a chasm requires teamwork that can help the abused recover something of what they’ve either lost or never had. It was, she says, a joy to discover.

The activities were followed by intense conversations about what the campers had experienced, deep questions that begged them to open up feelings long ago locked in some corner in the mind and heart, to relate the cables trek to what it was they felt at the hands of their abusers.

“I’ve spent hours in the woods with a group of kids,” she says, “trying to help them figure out what happened.” “Social work,” she says, “is incremental.” Unwinding from trauma is not at all easy; it requires time to open up and to heal.

It was tough work, but she stayed with it. “I like people,” she still says. It shows.

One of the toughest lessons she learned was about herself.

“You’re trained with all kinds of knowledge, but what I had to learn was that I didn’t have the answers.” Counseling didn’t mean delivering answers but helping kids find their answers to adverse childhood experiences.

Anything that happens to a child that is highly emotional and affects day-to-day life can be traumatic, and “trauma disrupts the emotional health of all of us.” Examples? “Being a latch-key kid can be a trauma. To some kids it is, while to others it’s not. A family member goes to prison—that’s a trauma. All kinds of things are traumatic and disrupt the emotional processing system.”

After 18 years at Wedgwood, Wolterstorff traveled to Russia with a church group, determined to find work there. She found herself in the dark of a steep Russian winter, with no exit, and suffered alone through difficulties in a world of ice.

That experience was a kind of trauma that created and carried its own dark memories. When she returned home, she did data entry for a while, then slowly edged back into social work, eventually ending up at place called Steepletown. Once again, she became a case manager (now called an “advocate”) in a program designed to get clients help to pass their GED exams and then offer specific job training in a number of trades. Steepletown was a great learning experience—“a non-profit, on the street, with people who really needed help.”

At Steepletown she had to be a cheerleader to kids who believed themselves to be losers.  Time and time again, she’d say, “You aren’t failing—you aren’t dumb.” And she’d meant it. Always she’d meant it.

At Steepletown, she confronted mental and emotional health issues that arose from poverty and systemic racism. There was, for instance, the gang member who snuck into the place because he didn’t want his buddies to see him working on his GED.  He wanted the degree, and eventually, years later, got it and could get into the Army. “The day he came back into the office dressed up in his uniform—Wow! Some tears were shed,” she says.

Learning has continued to be a lifelong process. She has learned, she says, that there is such a thing as systemic racism. She experienced it herself when accompanying a client into a bank and watching the clerk turn down the young lady’s request for cash even though she had an account. She witnessed that—and more.

Racism is trauma, too. “Generational poverty does things to you,” she says. Going with clients to the Department of Human Services, and seeing firsthand how broken the system is were lessons that were difficult to navigate, almost impossible for some.

Throughout her long career as a social worker, Wolterstorff never pursued management opportunities or supervisory positions; she always preferred being with people, “always did, always have.”

Amy Westra, who today is Dordt’s Associate Director of Career Development, worked with Wolterstorff for several years at Wedgwood and has known her for years. “She is a social worker who loves people, walks alongside them, and believes in them,” says Westra. “She has shown me how to love and serve those on the fringes in a way that speaks life into them personally as she strives to create a more equitable society.”

Since March of 2021, Jane Wolterstorff has been with “Grace’s Table,” a program for young moms, married or single. She oversees a team of staff and volunteers who offer programs and care for the individual needs of participants. Part of her job description includes facilitating and participating in continuous, shared learnings.

“Sharing learnings” seems an apt description of Jane Wolterstorff’s long and social work career. She hasn’t just been a provider, an answer book, a dispenser of wisdom. She’s spent 40 years in the muddle of abuse and poverty and racism. She’s learned that neither quick cures nor ideological yelping can touch the trauma in human hearts that are pierced by emotional wounds. Through her learning, she has come to understand that social workers have to listen, have to serve, have to love. Really. Love.