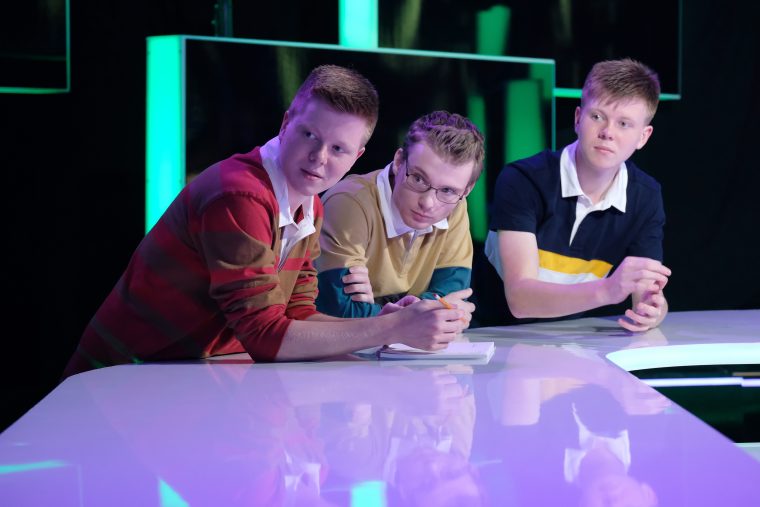 About 10 years ago, Alex and Derek Koops were watching videos of kinetic contraptions when they stumbled upon domino art, which are design projects built out of thousands of dominoes that are eventually toppled. They were intrigued enough to start making their own builds in their parents’ house in Sioux Center and to eventually post YouTube videos online. They slowly built up their domino collection through birthday gifts and Christmas presents. They also collected ping-pong balls, Hot Wheels tracks, and other contraptions to construct Rube Goldberg machines, a chain reaction that performs a simple task in a complicated way.

Now, with 200,000 YouTube subscribers and over 40,000,000 total video views, DaksDominos—Derek and Alex’s YouTube channel—is YouTube verified, highlighting the legitimacy of their brand. They are proud owners of a YouTube Silver Creator Award, which is given to YouTubers with 100,000 subscribers. They have had several videos that have gone viral, including one themed around Dude Perfect, a sports and comedy group, that currently has 9.7 million views.
“We had been building for five or six years at that point, and we maybe had 1,000 subscribers on YouTube,” recalls Derek, a junior digital media major. “Within a couple months after that viral video, we went up to 10,000. And we’ve grown from there.”

This spring, Derek and Alex jetted off to Hollywood to participate in the Fox television series Domino Masters, a show where “teams of domino enthusiasts go head-to-head in a toppling tournament to create mind-blowing masterpieces, with infinite possibilities and thousands of tiles and unique kinetic devices.” The show is set up in a bracket format; 16 teams participate in the show, but only four compete at a time.

“Fox found us through our YouTube videos and thought we would be a good fit for the competition,” explains Derek. “We went through many casting interviews, and eventually they took us out to L.A. for the shoot.”

It’s always a risk when a network makes a new type of show; viewers know what cooking or singing shows are, but a domino show? That’s new territory.

“Fox was willing to take a risk to give domino artists from around the country a chance to show off their skills to a larger audience than just YouTube,” says Derek.

What Alex appreciated most about being on the show was the unlimited materials to build their displays. The brothers own about 20,000 dominoes, but nothing compared to the many dominoes and gizmos that they had available during filming.

How has their Dordt education influenced how they’ve approached DaksDominos?

“I’m a business major, and there’s definitely a business side to our YouTube videos and creating projects for companies as well,” says Alex.

“I think one of the reasons why digital media captured my attention was because I was making this kind of stuff before I came to college. Being involved in that medium got me interested in doing that at Dordt,” adds Derek.
Alex says he isn’t sure what’s to come with DaksDominos, but if the show does well, then it could be huge for their business. Regardless of what the future holds for DaksDominos, Derek and Alex are grateful for their shared interest in domino art.

“We draw inspiration from other domino builders, or we use our imagination to come up with creative ideas,” says Alex. “Even after doing it for years, it’s still so much fun to design domino builds.”

Domino Masters is on Wednesdays at 9 p.m. Pacific / 8 p.m. Central on Fox; the first episode featuring DaksDominos aired on March 23.