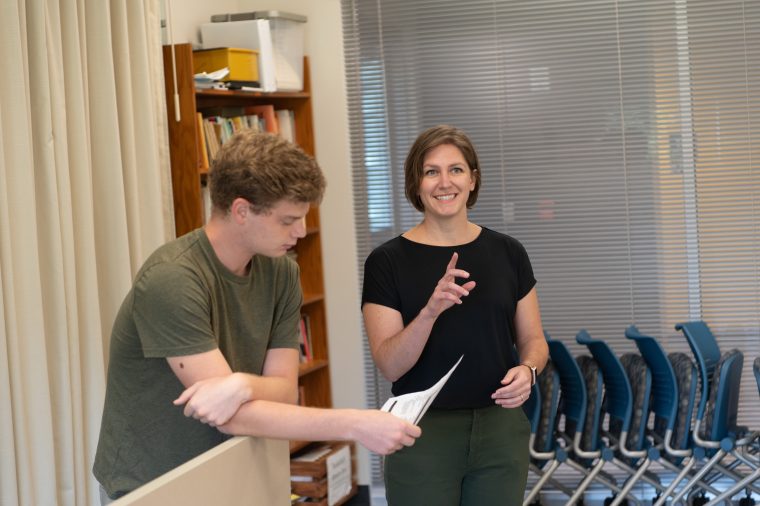 This spring, in conjunction with the mainstage production The Importance of Being Earnest, the Dordt Theatre Department is facilitating an acting apprenticeship program.

“The idea for this program formed out of the need to be prepared for Covid-19 to impact our ability to keep a show going,” says Associate Professor of Acting and Directing Laurel Koerner. “We had a few understudies for recent productions who could step in if needed. This led me to think about how we might reframe and enhance that experience for those students as something robust and to their benefit, worthwhile in its own right—not just waiting in the wings in case something goes wrong.”

The apprentice actors studied the material, learned from the cast through observation and discussion, and worked with Student Assistant Director Hannah Vanderhooft to develop their own interpretation of the characters while honing their acting skills.

“We’ve seen that the learning runs in both directions,” says Koerner. “The cast discovers ways to improve their acting, process, and understanding of these characters and the play by watching the apprentices work, acting with them, and having conversations with them.”

Apprentice actors were chosen for their dedication to productions and investment in their growth in the theatre program. “We asked ourselves, ‘Who is going to seize this opportunity and find it rewarding?’ It’s a mix of experience levels, and that’s for the better. Each one offers something that no one else can. The more opportunities they take to improve, the more likely they are to be ready for other roles in the future, says Koerner.

Lindsay Kuiper, a junior Secondary English Education major, is involved in the production both as the sound designer and as an apprentice actor. “Through the program, I hope to incorporate ideas from other people rather than simply relying on my own acting impulses all the time. This is an entirely unique experience because you’re able to see how other people interpret roles, and you can use their ideas to make your performance better,” says Kuiper.

The apprentice program has its own schedule, but apprentice actors meet with the performing actors a couple times each week. Managing two programs at a time brings additional logistical considerations, but the circumstances were right this spring. “This show offered us the right conditions: a relatively small cast, the style of the material, and our student assistant director, whose extensive stage management experience and work in the directing class prepared her for this role,” adds Koerner. “It is absolutely worth the extra coordination to leverage what’s already going on and enrich the learning of even more students through theatre.”

“Theatre is a collaborative experience, and it’s not always common to have this much collaboration on the level of character development during rehearsal time. There’s something really special about that,” says Vanderhooft, a senior English major. “This program has given me an incredible opportunity to grow my directing skills and work very closely with the department. I’m very honored to have been given this opportunity.”

Though the apprentices will not perform the show for the public, they will perform selected scenes for the theatre department, as a way of celebrating their work and growth.

“Our hope for our program is that more students will see that all they really need is each other to make exciting theatre happen,” says Koerner. “It doesn’t have to be a formal part of our season to be satisfying or worthwhile. If the apprentice program can enhance the learning that happens in our already rich processes, and inspire more student-initiated creative work, that’s a big win for us all.”